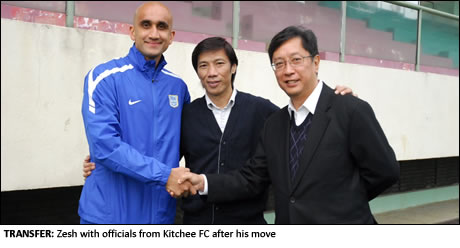 BRITISH Asian footballer Zesh Rehman is off to winning ways with new club Kitchee FC.
The defender made a shock move to the Hong Kong club last month from Thai Champions Muang Thong United.
And the change doesn’t seem to have affected the Birmingham-born player having recorded victories in his first two games for the club.
Rehman ran out a 2-1 winner in his debut match against JC Sun Hei, following that up with a hard fought 3-2 victory over HK Sapling.
“It’s always a good feeling to win but even better when it’s your debut for the club,” Rehman said after the 2-1 victory over JC Sun Hei
“I was pleased with how the team played and the character displayed to come back and win the game despite losing a goal. The support was excellent from the Kitchee fans and it was good to experience the atmosphere here and see the obvious passion for the game.”
There was little to suggest the former Premiership defender was looking to move away from Thai club Muang Thong United, which he joined a year ago, when he made the shock January move.
Rehman admitted he was offered several deals to ply his trade away from Thailand but said he was impressed with Hong Kong club Kitchee SC after meeting with the clubs directors.
Signing a one and a half year deal with Kitchee SC, Rehman paid tribute to Muang Thong United.
“Thailand was a great experience,” Rehman said.
“The Thai Premier League will continue to go from strength to strength and I would like to thank all the players, staff and officials at Muangthong for a wonderful experience in 2011.
“I would like to say a special thank you to all the MTUFC fans, fans of Thai football and the people for all their continued support.”
Rehman said he was looking forward to a new challenge playing for Kitchee SC.
He said: “I am looking forward to the challenge and getting started. The club play an attractive style of football and after meeting the directors and owner I was impressed with their ambition, drive and vision for the club.
“I had some very good offers in other parts of Asia but all my attention and focus now is on Kitchee in East Asia. I want to learn as much as I can from my new coach and help my new teammates on and off the pitch as much as possible. The Club have shown great faith in me and equally happy to have me in Hong Kong.”
Rehman is expected be a key figure in the AFC Cup competition – a tournament the footballer played in with Muang Thong United.
Kitchee kick off the tournament with a home game against Singapore side Tampines Rovers in March.
“It will be good to play in The AFC CUP again as I really enjoyed the experience of travelling over Asia playing against good sides in 2011,” Rehman said. “We have games in Vietnam, Singapore and Malaysia all to look forward to.”
Kitchee SC President Ken Ng said Rehman would be a valuable asset to the club.
“Kitchee is happy to have secured Zesh has our Asian Foreigner for the upcoming AFC Cup competition,” he said.
“Not only has Zesh played at the highest level in England, he has also demonstrated his leadership and good nature as an individual who shares our values. We believe that he will make a positive impact at Kitchee and in Hong Kong football.”

These fees will add right up in the run that will be longer.

Bollywood Throughout The Ages