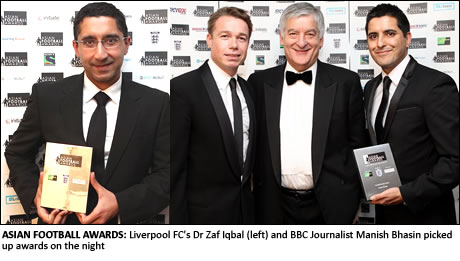 A HOST of British Asian figures in the world of football have been honoured at the first ever Asian Football Awards.
Held at Wembley Stadium winners on the night included footballer Michael Chopra, referee Jarnail Singh and BBC journalist Manish Bhasin.
The awards aimed to highlight the achievements of Asians across all formats of the game and were supported by the FA, Kick It Out and Sporting Equals.
Guests for the high-profile event included FA Chairman David Bernstein, former footballers Paul Elliot and Graham Le Saux, anti-racism campaigner Piara Powar, journalist Mihir Bose and Bend It Like Beckham director Gurinder Chadha.
Ipswich Town striker Michael Chopra won Player of the Year, beating off stiff competition from the likes of Netan Sansara and Zesh Rehman, while Wolverhampton Wanderers defender Danny Batth, currently on loan at Sheffield Wednesday, was honoured with the Young Player of the Year Award.
The Awards also honoured figures who work behind the scenes including Liverpool FC doctor Zaf Iqbal and Watford FC Commercial Director Raj Athwal.
Imran Hassan Co-Founder Asian Football Awards said: “It was really pleasing seeing so many key figures supporting and enjoying the awards, but the hard work begins now in our legacy programme. A very big congratulations to all the nominees and winners, it really was truly inspirational to see so many role models, in particular nominees like Rikin Shah and Lifetime Achievement recipient Jarnail Singh.”
Co-Founder Baljit Rihal added: “The first ever Asian Football Awards was a celebration of the success of Asians in all aspects of UK football. We are proud to have created the awards which we are confident will be an annual high profile event.”
Sporting Equals, who partnered the event, praised organisers for honouring not only players but support staff and grassroots organisations.
Arun Kang CEO Sporting Equals said: “Sporting Equals was delighted to be a partner at the first ever Asian Football Awards. It was a fantastic evening celebrating the significant contribution that British Asians are making in the game at all levels, congratulations to all the nominees. I believe the strength of the awards is that they not only showcase elite players like Michael Chopra the Player of the Year, but also the considerable impact that Asians are making in coaching, sports medicine and administration, creating new role models and inspiring the next generation. We are now looking forward to finding talent, engaging and empowering communities through SE Talent id the legacy programme of the Asian Football Awards 2012.”
The Asian Football Awards will be aired on Sony Entertainment Network on Friday 10th February 2012.

I attempted Online Dating in 6 Various U.S Metropolises. Here Is What I Found Out.