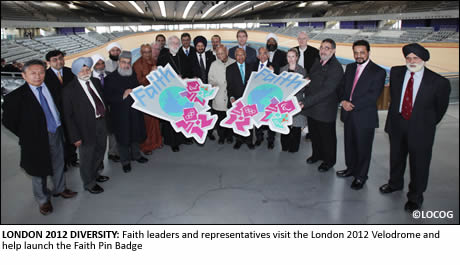 LEADERS of nine faiths have launched a pin badge created to celebrate London 2012’s six strands of diversity during a special tour of the Olympic Park.
The Archbishop of Canterbury, Lord Indarjit Singh, Director, Network of Sikh Organisations and Dr Nathubhai Shah, President of the Jain Academy UK were amongst the faith leaders and representatives who toured the Olympic Park and visited the Velodrome.
The London Organising Committee of the Olympic Games and Paralympic Games (LOCOG) said it wanted to use the power of the Games to inspire lasting change and is committed to making sure that people from all faiths feel involved with the London 2012 Games.
All nine faiths – Christian, Muslim, Hindu, Sikh, Jewish, Bahia’s, Jain, Buddhist and Zoroastrian – will be represented in the Multi-Faith Centre in the Olympic Village during the Olympic and Paralympic Games. There will also be a chaplaincy service assisting around 17,000 athletes and officials, up to 200,000 staff and volunteers and 20,000 members of the press.
During the London 2012 Games the Multi Faith Chaplaincy Service will involve 193 chaplains recruited from the faith communities.
As part of their visit, the Faith leaders and representatives helped launch the Faith pin badge, the fifth badge created to celebrate London 2012’s six strands of diversity and engage all communities to support London 2012. The Multi-Faith Reference Group worked together to come up with the simple design which is a visual statement of the world’s faiths working together to engage with and serve the Games.

Paul Deighton, LOCOG’s Chief Executive, said: “The diversity of London and the rest of the UK was one of the reasons why London was chosen to host the Games and I am thrilled that representatives of all faiths had the opportunity to tour the Olympic Park and see the progress we have made.

“The Olympic Games and Paralympic Games are not only a showcase of sporting excellence but also a celebration of different faiths and cultures. Over the last four years, we have worked closely with all nine faiths to ensure that people of all faiths feel they can play their part in the London 2012 Games – whether they are a spectator, athlete or member of the local community. And the launch of the Faith pin badge demonstrates our commitment to leaving a legacy of greater inclusion and understanding of diversity long after the Games have finished.”
Dr Nathubhai Shah, President of the Jain Academy UK, added: “The transformation of the site for the public good is unbelievable. The Olympic Games, sports and faith work together for the progress of the British people.”

2 – Compare financing possibilities direct. Frequently, you’ll be able to financing the automobile you want to purchase straight from the car dealership.

Man charged with attempting to pervert the course of justice