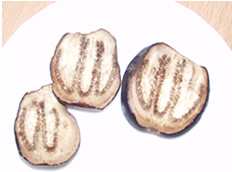 A MUSLIM mother preparing food for her family during the holy month of Ramadhan was given the shock of her life after slicing open an aubergine to find the word ‘Allah’ inside.
The Arabic inscription which means God in Islam was found by Muslim housewife Shafia Begum from the Small Heath area of Birmingham.
Mrs Begum’s family said the discovery was a “miracle” because of the significance of the current month in the Muslim calendar.
Mrs Begum’s daughter, Rasma Begum, who rushed from her home in Kidderminster after receiving a call from her mother about the discovery, told The Asian Today the family felt blessed to have made the discovery in the month of Ramadhan.
“This is such an amazing thing to have happened to our family”, she said. “We have had loads of family and friends coming round to see the aubergine. The response has been so much more greater because of Ramadhan”.
Mrs Begum, who was preparing food for opening of the fast when she cut open the aubergine, was flabbergasted at the find.
“My mum was fasting at the time and when she saw the word Allah inside the aubergine she couldn’t believe her eyes”, her daughter Rasma said.
“She put it away because she was alone but as soon as my sister Fatima came home she rushed to show her. We’ve all read about things like this happening but have never thought we would be lucky enough to witness this miracle.
“It’s a very big month for Muslims and we are very lucky that this has happened to us. I felt my heart was going to explode when I first saw the aubergine. We plan to take it to our local mosque and show the imam”, she added.
The family are now trying to preserve the aubergine in the hope it can be seen by as many Muslims this Ramadhan.
What are your thoughts on Religious Miracles?
Do you have a story similar to this? Send your views and stories to zakia@urbanmedialtd.com