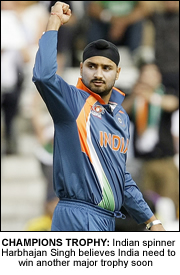 INDIAN spinner Harbhajan Singh believes the time has come for India to win its next ICC tournament especially after his side’s disappointing exit at the T20 World Cup in England in June.
The spin magician says victory in this month’s ICC Champions Trophy would allow the former world champions an opportunity to remind the rest of the world how good a side it is.

Harbhajan said: “We are a good side and this is the time for us to pick ourselves and show the world what we’re made of and it’s a great opportunity for us to get revenge on the teams we’ve lost to in the recent past.

“We didn’t play well in the ICC World Twenty20 and this tournament is the next biggest this year. So it’s our chance to show people what we’re capable of.

“To be honest, we definitely have to play well as we all know we didn’t play to our full potential in the ICC World Twenty20. A lot of things didn’t go our way in that tournament but that’s cricket and these things happen.”
As defending champions, India were one of the favourites for the crown going into the World T20 tournament.
But three straight losses in the Super 8’s left a talented Indian side bottom of the group and out of the tournament.
Harbhajan admits that while the team did not play well during the tournament, they are desperate to prove they are a world class team by winning the Champions Trophy.

“We accept we didn’t play to our full potential so now we need to make sure we are all looking forward to this tournament where we can prove to everyone, and ourselves, that we are one of the top sides,” he added.

However he believes India has the combination to handle every situation.
“There are a lot of players to watch like Yuvraj Singh, Mahendra Singh Dhoni, Sachin Tendulkar, Gautam Gambhir, Suresh Raina.”

He’s also got his one eye on the Pakistan side as the two traditional rivals go head to head at Centurion on 26 September: “The Pakistan side obviously has Younus Khan and Mohammad Yousuf but Yousuf is definitely a player to watch.

“Yousuf doesn’t look like he can run that fast but he will definitely make it for them by picking up ones and twos. Other players to keep an eye on are Misbah-ul-Haq and Younus Khan.”

Harbhajan, who has taken 210 wickets for India in 189 ODIs, admits his team mates need to remain calm and focus on the job if they are to succeed.
He said: “I think the biggest threat for us will be ourselves. I want to be very straight and humble about this but we don’t want to pay attention to what other people were doing.

“We just want to be humble in our process and in what we do. We know how to win matches from any given situation and we can win against any side on any given day even if we play 70 or 80 per cent of our potential.

“It’s going to be hard but we’ll go out and give it our best shot.”