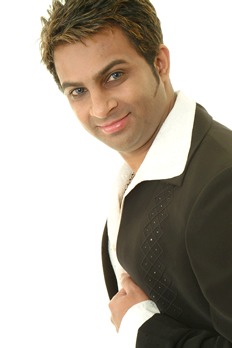 A LEICESTER telephone account manager is hoping to kick-start a career in glamorous Bollywood after landing the lead role in British producer Sevy Ali’s next film.
Zia Choudhury, who goes by the stage name of Zak, said he was extremely “excited” after landing the role in the as yet untitled film headed by producer Sevy Ali.
Zak, who already has some Bollywood experience to his name after appearing in the opening scenes of blockbuster ‘Kabhi Khushi Kabhi Gham’, is expected to begin shooting for the film, described as a suspense thriller, early next year.
“UK based producer Sevy Ali from Flicks International saw my potential after watching me in action on location of another movie and I’m very excited and fortunate to be given this opportunity”, Zak said. Unable to give the finer details about which stars he will be working alongside, he added in true Bollywood style producers will keep fans “guessing” until the last minute when the full cast is announced.
The 35-year-old, who is looking forward to the birth of his first child next March, is hoping his experience working on a Bollywood film will build an already promising acting portfolio which will see Zak hit the big screen later this year in Kiran Sen’s next movie ‘Of Yin and Yang’.
And alongside his acting exploits, Zak is managed by Exclusively Bollywood, a talent agency run by his wife, Kay Choudhury.. “We saw a market in this industry last year for supplying English and European artists to the producers here in the UK”, he said.
“As I was a model previously, used my contacts and started up the agency Exclusively Bollywood.”
While Zak has no plans to give up his day job as a telephone account manager, he can’t rule out a full time career in the world’s most glittering film industry.