Home Sports Kirsten – We can cope without Sehwag 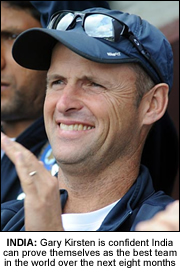 INDIA coach Gary Kirsten admits his team will miss opening batsman Virender Sehwag in the triangular one-day series in Sri Lanka, but believes his absence will not stop his team becoming the best in the world.
Sehwag will miss the Compaq Cup series – which will see India take on New Zealand and Sri Lanka – due to a shoulder injury he sustained during the Indian Premier League in May.
The explosive opener will also miss the ICC Champions Trophy in South Africa starting later this month, but Kirsten feels the team have enough depth to cope with Sehwag’s absence.
As his team made their final preparations for their first match of the series against New Zealand on Friday, Kirsten said he was pleased with the progress of his players.
“We have set our goals in terms of what we want to achieve in the next eight months,” Kirsten said. “But certainly one of them is to become the best cricket team in the world.
“We are heading that way and we are very excited about the way we have gone about our task to get to that position. We know we have to continue to perform well as we continue the quest to be the best. Obviously missing someone like Sehwag is huge. He’s a high-quality player and any team would love to have him in the mix.
“But I think we have got a lot of depth in our cricket at the moment. We have a good batting line-up which is flexible in the middle.
“I think we will try and mix it up a bit and some of the younger players have proven that they are capable of keeping their place in the team.”
Kirsten claims the return of Rahul Dravid to the team is a huge boost.
“It is great to have him in the side,” he said. “With the sort of experience he brings, it’s going to help the team. We won the last two series we played in Sri Lanka and we are confident. But we think ahead and not harping on past results.”
India will take on New Zealand in their first match in the Compaq Cup on Friday and will go top of the International Cricket Council’s one-day team rankings should they win all of their three matches.

Top VR Intercourse Cam Sites a€“ Are they any good?

Tinder key Admirer revealed: what exactly is it & so how does it run?