Kick it Out receives £110,000 backing from Football Foundation 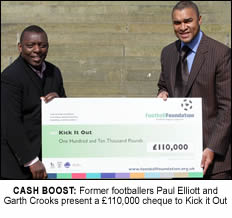 ANTI-RACISM body Kick it Out has been awarded a cash boost from the Football Foundation.
The organisation, which works to combat racism in football, was presented with a cheque for £110,000 by former footballers Paul Elliott and Garth Crooks.
A further £75,000 will be given to Kick it Out to help fledgling teams develop closer links with mainstream football.
Kick It Out is offering a number of separate grants of up to £2,000 each to grassroots and amateur football clubs across the country to start their own project which seeks to achieve this.
Paul Thorogood, Chief Executive of the Football Foundation, said: “Since its inception the Football Foundation’s key goal has been to increase opportunities for everyone to be able to play our national game if they want to. It is excellent news that through this new partnership with Kick It Out even more community groups will have the opportunity to get involved and play football.”
Kick It Out Director, Piara Powar said: “This money will help to increase participation from BME communities in all areas of the game including playing, coaching and refereeing and use the game to create more inclusive communities. It will also help capacity build community initiatives across the country.
“In addition, we’re keen to receive applications where projects demonstrate a willingness to increase participation of especially women and girls, Gypsy, Roma or Traveller communities and groups working to address issues of racial tension and territorial conflict.
“We’re delighted to be teaming up with the Football Foundation to help deliver this.”

Heartthrob Imran Khan Lets His ‘Naughty’ Side Out in New Film

7 Symptoms They’re Not Too Into You. As you have earned some one that’s...