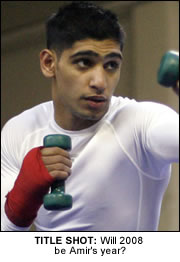 BOXER Amir Khan is almost certain to get a shot at a world title this year, promoter Frank Warren has revealed.
The Bolton star will line up against World Boxing Organisation lightweight No 2 Martin Kristjansen on Feb 2.
And a win against Kristjansen could see the 21-year-old move closer to a coveted world title shot against World Boxing Association, World Boxing Organisation and International Boxing Federation champion Juan Diaz or interim champion Michael Katsidis.
Boxing promoter Frank Warren said: “Amir has achieved far more than I expected in such a short space of time, and I believe 2008 will be his year and he will challenge for a world title at some point in the next 12 months. If he wins this fight it moves him up the [world] rankings.”
Khan and Warren have found themselves at loggerheads in the past over Khan’s ambitions for a world title.
But at last, the two seem to have agreed on the same thing with Khan saying he had already predicted 2008 would be the year he had his shot at the big time.
“I did say I’d be world champion in five fights before I faced Graham Earl last time so it’s going right for me,” Khan said.
‘I’d still love to fight for the British title and I thought this next fight would be Jon Thaxton so I could shut him up. But it’s your promoter who gets you the fights.’
Meanwhile, Khan’s £1million gym will be opened tomorrow by Tory leader David Cameron. Khan has put £800,000 of his own money into the gym in the Halliwell district of Bolton.

Tinder for producers? Brand new app for those of you pursuing a muddy fit

What are You interested in in an union? a dating software and going online...