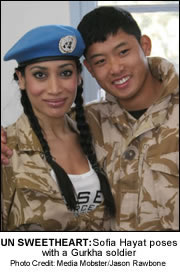 Brit-Bollywood star Sofia Hayat brought cheer to United Nations troops in Cyprus after she was selected to be their New Year Sweetheart.
The aspiring actress was flown out to Cyprus last week as an official guest of the United Nations Peacekeeping Force in Cyprus after she was overwhelmingly voted ‘New Year Sweetheart’ by Gurkha soldiers serving in the country.
During the hectic tour of the island Sofia cooked meals for the UN personnel and spent most of her time lifting the spirits of the soldiers who did not go home for Christmas.
The Gurkhas honoured Sofia with a Kukri Dance –a sacred ceremony performed for high-ranking dignitaries and for people who have done service to the Gurkhas. In return the Gurkhas were treated to an all singing and dancing show performed by Sofia. The soldiers were also treated to sneak-previews of Sofia’s new films, ‘Unforgettable’ and ‘Cash And Curry’ which are both scheduled to be released this year.
Commenting on her visit, Sofia said as a Muslim woman it was important to show her support to the work of the United Nations.
“With the events happening around the world involving the war against terror it was very important to me as a Muslim woman to show that I believe in the peace-keeping role of the United Nations,” she said.
“The United Nations and soldiers involved in peace-keeping around the world need to know that there are many Muslims like me who support their effort to bring peace to this planet. The UN’s role is nothing to do with religion, whether you are Hindu, Sikh, Muslim, Christian or Jew you must support them.”
Click here to see more pictures of Sofia’s visit