Captain given another year to prove himself 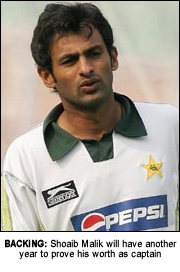 THE PAKISTAN Cricket Board has kept faith with under-fire captain Shoaib Malik and have backed him for another year.
Malik was widely expected to bear the brunt of his team’s dismal failure against India after Pakistan lost both the one-day and Test series.
The result marked one of their worst performances against their arch rivals and followed an equally disappointing home one-day and Test series loss against South Africa.
Malik, who missed the final Test match through injury, will now have until December 2008 to prove his worth.
“Malik is a promising captain and we will lend him all support. We are confident he will learn and become better with time and we remain committed to our decision to retain him as captain till end of this year,” PCB Chairman Nasim Ashraf said.
The news will come as a welcome relief for Malik who urged the board to give him time as captain after the first Test match loss against India.
Pakistan coach Geoff Lawson however did not receive the same backing.
Ashraf said the board would be seeking a meeting with Lawson into the team’s shortcomings.
“The team was short on mental toughness and professionalism and the responsibility for this lies with the coach. I am not satisfied with Lawson’s performance. When he returns from his Christmas holidays we will talk to him,” Ashraf added.
Pakistan will host Australia for a Test and one-day series in March next year and that will be followed by the Asia Cup in June.

Appeal as Family Attacked Outside Akbar’s

Largest UK festival of South Asian culture returns in May 2017

No Guts, No Heart, No Glory