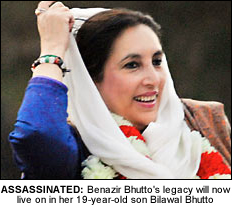 HER SUPPORTERS clapped and cheered as she emerged from the plane that brought her back into Pakistan from Dubai.
There was even a prayer to god and a tear as Benazir emerged to see her once familiar surroundings. For Benazir and her supporters January 8th was supposed to be the day she brought democracy back to Pakistan. It would have been the day of elections across the country in which she would have stood, a chance finally for the people of Pakistan to have a say in the running of their country and fulfil their hopes. That dream is now shattered.
On 27th December Benazir Bhutto was assassinated, killed by the political machine that claimed the life of her father Zulfikar Ali Bhutto in 1979.
On her return to Pakistan she survived a blast in Karachi in which more than 130 people were killed. She vowed not to falter against the threats made against her life, a freedom fighter for the people of Pakistan.
But just a week after she celebrated Eid she failed in that fight. As she left her election rally in Rawalpindi she was killed as she waved to her supporters from the sunroof of her jeep.
More than fifteen others were also killed as her assassin blew himself up just seconds after killing Benazir. As news of her death swept Pakistan her supporters reacted with anger taking to the streets in a wave of emotion that threatened the stability of the already volatile country.
Party aides described her as a “martyr”, while former PM and election rival Nawaz Sharif called her a “sister” and pledged to “take revenge on the rulers”.
Less than 24 hours after her death Benazir was buried in her home town of Garhi Khuda Bakhsh, in the Sindh province of Pakistan next to her father. The scenes were chaotic with thousands of mourners gathering outside her family mausoleum to witness her burial.

Benazir’s death is the latest in a string of violent incidents to mar the Bhutto name.
A political dynasty that has shaped Pakistan for more than 30 years only one Bhutto sibling now survives.
Benazir’s father, Zulfiqar Ali Bhutto, was prime minister of Pakistan in the early 1970s. He was imprisoned by General Zia ul-Haq in 1977 following a military coup and charged with conspiracy to murder. He was executed two years later.
After his death the Bhutto name fell to both Benazir and her brother Murtazza who fled to Afghanistan following his father’s death.
From there he mounted a campaign against Pakistan’s military government. He won elections from exile in 1993 but was shot dead under mysterious circumstances shortly after when he returned to the country.
The youngest of the four children, Shahnawaz Bhutto, was also to a lesser degree politically-minded. He was found dead in his apartment in southern France in 1985. His death and never been fully explained.
And now Pakistan tears fall for Benazir.
With the finger of accusation being pointed in all directions as to who was responsible for her death the question now remains what becomes of Pakistan. The forthcoming elections were designed to bring stability to the country but with fingers being directed at the government it is hard to imagine how they will bring order to the masses.
Politically Benazir’s death leaves a huge vaccum at the heart of Pakistan’s political system.
Despite her flawed past in which she was twice dismissed on charges of corruption and incompetency by the military she has always been a major force in the political field.
Her stance against the growing threat of Islamic extremism in the country brought her much support She commanded almost a third of the electorate who dreamt the same democratic dream as their leader.
Now that she’s gone who will fill the powerful role of the anti-extremist?
Faith in President Musharraf is not widespread. His handling of the siege at the ‘Red Mosque’ in Islamabad in which 105 people died was widely criticised. The incident was followed by deadly militant attacks and suicide bombings.
And his sudden imposition of emergency rule was more about marginalising his critics than handling extremism in the country.
As it stands Musharraf may nor survive this latest incident which threatens the country.
For the Pakistan People’s Party, they now have a new leader – 19-year-old Bilawal Bhutto, son of Benazir.
He will lead the running of the party to his father until he finishes his studies at Oxford University.
Bilawal told journalists, “My mother always said democracy is the best revenge.”
When Benazir Bhutto was laid to rest many thought she had taken the chance of democracy with her.
But it seems even beyond the grave the Bhutto name still refuses to be defeated.