Home Interviews Sammir Dattani: My work has gone to another level 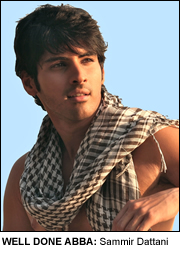 FROM sharing screen space with Spice Girl Emma Bunton in Pyaar Mein Twist, to roller skating through the streets ofLondon in a music video, Sammir Dattani has had parallel success in Bollywood and the southern film industry.
Hitting the box office this Friday, Sammir stars with Boman Irani and Minissha Lamba in Shyam Benegal’s Well Done Abba. To be shortly followed by I Hate Luv Storys, from the Dharma Productions stable, wrapped and ready for a Summer 2010 release.

Your family is Gujarati, you were born and brought up in Bombay, and you have worked in Hindi, Kannada and Tamil cinema, so what languages do you speak?
Well I speak Kannada, I speak Gujarati, Hindi of course, English of course, and a bit of Marathi and Telugu.

You have two major releases coming up with Shyam Benegal’s Well Done Abba and I Hate Love Storys from Dharma Productions. Is your career about to sky rocket with such films?
Well Done Abba has already started to do that as we’ve gone round some of the international film festivals. Looking at Karan Johar’s past record, his films do become box office successes, as they excite the audiences. As an actor I feel my work has gone to another level already from just working with Shyam Benegal or in a Dharma Productions film. So I feel my career is already moving on to greener pastures, and the outcome is just a small aspect I guess.
What is your ritual on the Friday the film hits the box office?
I go out and watch the film with the audience and try to sit back and enjoy the whole process. I try to disconnect from the film as my job is done by then. And after the film comes out your friends, family, people you haven’t spoken to in ages, people you don’t know all come up and give their opinion. Every department of filmmaking has done what they think is correct, and it’s out there, so you stand back and see it all happen in front of you like a circus.
Tell us about your role in the film?
In the words of Shyam Benegal, he wanted my character Aarif to be a symbolic take on the youth of India today. He is a young village boy from Andra Pradesh who speaks in Dakani, a certain dialect used in that region. He’s a progressive Muslim boy working two jobs as a garage mechanic and a typist at the high court. He’s actually an orphan so he’s always trying to fit in and win people over with his enthusiasm as he doesn’t know where he belongs. This is what happens with Abba (Boman Irani) when my character falls in love with his daughter Muskan (Minissha Lamba), and tries to decide what he has to do to convince Abba to give the hand of his daughter. He also comes up with some of the solutions to the problems in the film, using his knowledge and education to fight for justice.
You then follow Well Done Abba with I Hate Luv Storys. Dharma productions have a strong track record of successful debut director films (Tarun Mansukhani’s Dostana, Ayan Mukherji’s Wake up Sid); there must be high expectations from Punit Malhotra’s first film?
I mean obviously my expectations are sky high! Dharma productions have a great track record. All of us have grown up on watching Karan Johar’s movies. I remember when Kuch Kuch Hota Hai came out I was in my first or second year of college, so I was the ideal target audience and obviously was totally taken up with the film like everyone else my age. It’s my first film with Dharma Productions and it’s a rom-com like the title suggests. We were three youngsters (co-starring Sonam Kapoor and Imran Khan), who had a great time making the film. Well four youngsters as I would put director Punit in the same category, he pretty much had the best time making I Hate Luv Storys. Though we’ve only just finished shooting for it, so the whole expectation stuff really begins at a later stage. 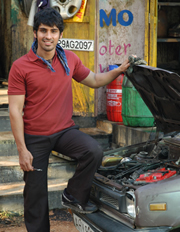 You appeared with Spice Girl  Emma Bunton in a song for Pyaar Mein Twist. What’s your take on foreign actors in Bollywood?
It’s a world market and there’s always been an exchange of talent, with people coming here to add to our films and people going outside India, like A R Rahman who has become a phenomenon in the west, and recently we had Akon who came down to sing a song for Shah Rukh Khan’s film (RA One). The audiences want to be entertained, to see something new and fresh, so a confluence of actors from all over the world coming together makes it more interesting and exciting.
We’ve seen you in an earlier music video roller skating through the streets of London. What does Sammir Dattani do when he is over here?
London is one of my favourite cities in the world. The last time I was in the city I was looking at property and one of my dreams is to buy a house in London, though I can’t afford it yet. I have some family in London and have been visiting it since a child. Just walking around the streets in places like Covent Garden, which is one of my favourite areas, is something I enjoy so much. I have a lot of friends in London and it’s good to walk into a pub and catch a football game because of the kind of hysteria and the energy you see when a match is playing on television. It’s like cricket in India.