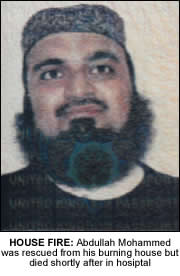 POLICE have today announced that they are treating the death of a 41 year old Blackburn man who died following a fatal house fire as murder.
Devoted father Abdullah Mohammed, 41, died after he and his family were rescued from a fire at their home on London Road.
His wife, Ayesha who is 39 years old remains in a critical condition in Royal Blackburn Hospital. His daughter, Siddiqah Mohammed, 14, also remains in a critical condition and his son Muhammad Mohammed, 9, is now in a stable condition at the University Hospital in Manchester.
Ayesha’s 18-year old son, Ashraf, has returned home from Bradford University to be with his family.
A joint examination of the scene has been carried out by specialists from Lancashire Fire and Rescue and Lancashire Constabulary.
At this stage the cause of the fire is unknown but detectives said they were treating the incident as murder.
One line of enquiry is focused on tracing three men who were seen to get out of a dark coloured car around the time of the fire.
Detective Superintendent Neil Hunter from the Force Major Investigation Team who is leading the investigation said: “We are keen to trace three men who were seen to get out of a dark coloured hatch back car and approach the house around the time of the fire. It is believed this car was parked in the back alley behind the house and I appeal to anyone who saw these men, or the car to come forward.
“Forensic investigations are ongoing to determine the cause of the fire and my team are making enquiries to find out what happened.
“Understandably, this is an incredibly difficult time for the family but this tragedy has also affected the wider community. I would like to pass on my thanks for all the information that has been passed onto the inquiry team so far and I urge anyone with information, no matter how insignificant it may seem, to contact the police.”
Anybody with any information is asked to call Blackburn police on 0845 1 25 35 45 or Crimestoppers anonymously on 0800 555 111.
Related Articles:
Fatal house fire Dad named