Home Sports Khan is our ‘Ray’ of hope, says Warren

Boxer comes of age in 72 second demolition of Earl 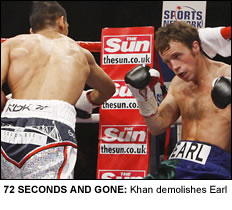 IT WAS billed as Amir Khan’s toughest test as a professional boxer, but it took just 72 seconds for the 21-year-old Bolton sensation to silence his critics.
Khan, who celebrated his 21st birthday on Saturday night, defended his Commonwealth lightweight title for the second time against 29-year-old Graham Earl and while much had been written about the boxing calibre of Earl, you’d be forgiven for thinking Khan hadn’t paid much notice.
Just one minute and 12 seconds into the fight, Earl was left dazed and confused after a flurry of quick unstoppable punches as Khan swarmed all over his opponent.
Clearly unable to continue referee Howard Foster stopped the fight and Khan jumped up into the air with delight.
It was a performance which deserved applause, and for Khan it proved his hunger for success is as strong as it has ever been.
He claimed he would fight for a world title “tomorrow” after outclassing a boxer eight years his senior.
“It’s up to (promoter) Frank Warren – but I’ll fight for a world title tomorrow and prove everyone wrong,” Khan told ITV1.
“I wasn’t surprised (at the quick stoppage), I’d been training hard for this fight.
“I want the number-one spot and he was the number one in Britain, and I wanted to beat him.
“I knew he was hurt after the first knockdown and I wanted to put the pressure on.”
Khan added: “After the first knockdown I saw his eyes – he didn’t want any more.
“He was gone and I put the pressure on.”
The youngster revealed he had been spurred by what he saw as disrespect from Earl.
“I was fighting the best fighter in my career and the way I took him out in the first round surprised me,” he said.
“When there’s someone there disrespecting me, calling me a kid, it hurts me. It motivated me and I’ve proved a point to all the critics.
“Graham is a great fighter, he’s been a world champion, been the European champion – so for me to beat someone like that in the first round is great.”
Frank Warren – who confirmed Khan’s next fight would be on February 2 – admitted he was shocked at the speed of the victory.
“I never expected that at all,” he said. “I thought it would be a tough fight and get to 10 rounds. It was a phenomenal performance. He’s made a statement. Fantastic.”
And he likened Khan to former Olympic gold medallist Sugar Ray Leonard.
“He’s got a bit of a way to go, but I believe he’s going to be the goods, I really do,” said Warren.
“God knows what he’ll be like at 24 or 25. He’ll be something phenomenal.
“It reminded me of looking at a young Sugar Ray Leonard,” he added.
“He fought a guy ranked the best in the country with a wealth of experience.
“And Amir just didn’t let him get into it. It was a cracking left hook he caught him with and the finishing power, the hand speed, it is all coming together.”

BBC back dancer over ‘Paki’ jibe

Guest star Raj Somaiya on The Real Housewives of Cheshire