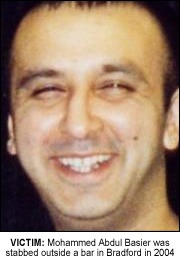 A MAN wanted in connection with the fatal stabbing of a Bradford father five years ago has been extradited from Greece.
Dana Abdul Qadir Abdullah, 29, was arrested in Athens under a European arrest warrant.
He was flown back to the UK after Greek Justice Authorities granted permission for his extradition. He will appear before Bradford Magistrates court today.
He was sought by detectives from West Yorkshire Police in connection with the murder of 27-year-old Mohammed Abdul Basier.
The father-of-one was stabbed outside the West End Bar in the Manningham area of the city in February 2004.
Mr Basier’s family had offered a substantial reward for information on his death, while the murder inquiry also appeared on BBC Crimewatch.
Det Supt David Pervin, who is now leading the enquiry said: “Since Mr Basier’s death officers from the team have left no stone unturned in the search for his killer and have now secured the extradition of a man wanted in connection with this enquiry.

“This would not have been possible without the help of our colleagues in Greece, the Foreign and Commonwealth Office and Interpol, and we are grateful to all concerned for their assistance.”