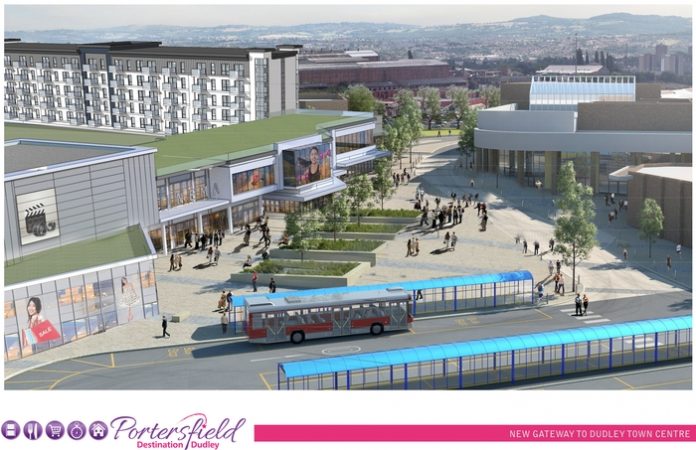 An image of the Portersfield development in Dudley which has been released show shops and bars, linked by open plan walkways for shoppers once it gets the green light.

A planning application has been submitted to Dudley Council planners by developer Avenbury, which will be considered by the development control committee later this year and could see the building razed this autumn.

If approved Dudley’s historic skyline and leisure and retail complex will mark a key step in creating the huge development which will include new shops, a cinema, bars and restaurants, a gym and accommodation for students – creating more than 500 jobs.

“This is a significant step towards creating a bustling town centre environment with shops, bars and restaurants.

“It still has to go through the normal planning procedure but if approved this will be the biggest development in Dudley in decades.

“This really feels like an exciting chapter for our history books, in the heart of the historic capital of the Black Country.”

A spokesperson for Avenbury, added:

“This is an extremely exciting project that will be a game changer for Dudley, alongside all of the other major infrastructure and redevelopment projects that are happening in the town.

“Dudley is finally getting the investment and recognition it deserves and we’re proud to be playing a part in shaping its future.”

When complete, Portersfield will link in with the proposed new bus station and connect with the planned £353million Midland Metro extension through the town.