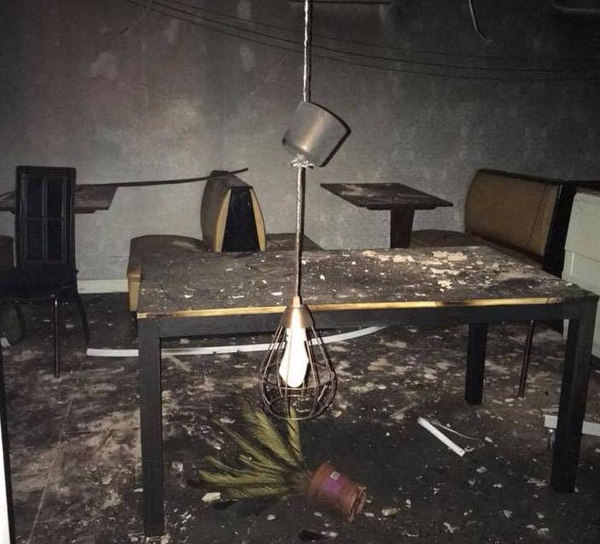 Owner Mehtab Hussian of Sweet Treat, on Lord Street, Palfrey, has been left devastated after flames ripped through his shop.

Witnesses described seeing a group of men set fire to the shop, while a petrol bomb was reportedly thrown through the window which started minutes after the shop closed at 10pm.

A BMW parked outside the shop was also torched, while a 78-year-old woman next door had to be rescued by neighbours as the fire broke out.

Mr Hussain, aged 23, has run Sweet Treat for three years and said he was heartbroken by the attack on the business, which he fears was targeted.

He told how he returned to see his ‘pride and joy’ consumed by flames.

Mr Hussain, said: “I closed up at 10pm and went home. I got a phone call saying the shop was on fire. I said, ‘what are you on about the shop’s on fire?’

“I was heartbroken. I was in tears thinking why would somebody do this to me?

“I am a young lad, 23, who has got his own business. Everybody in the community gets along with me.

“I have had the shop for three years and have had no trouble with anyone.”

As well as the damage to his business, Mr Hussain said lives were also put at risk.

“My priority was to get the elderly woman out. I didn’t know she was out when I got there. The scary thing is it could have happened five minutes before I closed.”

Mohammed Ahmed, 22, whose house backs onto the shop, said: “I was working and had a phone call from my uncle saying the shop next door was on fire.

“He’s a friend of mine and since it’s been open I have been in to show my love and support.

Police said the suspects had been spotted on CCTV running away from the shop towards Queen Mary Street and have called for anyone with information to come forward.

The young business owner said he considered giving up on the shop after the attack.

He said: “My family are saying don’t give up but what’s the point in carrying on?”