Police in India refused to help two teenagers who were involved in a road crash in Saharanpur, Uttar Pradesh have died. 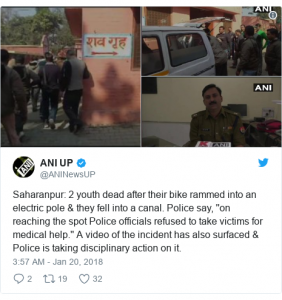 The two 15 year olds teenagers who were involved in a car accident were left to bleed to death on the roadside after three offices refused to take them to hospital. The police officers were worried the blood of seriously wounded teenagers would spoil their vehicles.

The officers who have been suspended are under investigation and accused of failing to transport the young men because they did not want blood stains in their car.

A short video, which has gone viral, shows both teenagers injured and lying on the road with a bystander pleading with the police officers as they refuse.

One of the parents have said “Our families are ruined, if those policemen had shown even the slightest amount of mercy, my son would have been alive.

In 2016, the Uttar Pradesh Government actioned a statewide system of police patrolling through a project called Dial 101 that gave the police more veichles for prompt action.