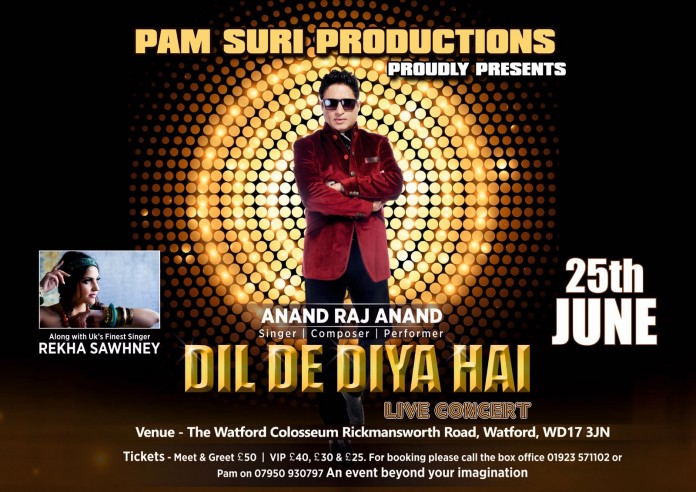 DIL DE DIYA HAI UK concert marks the start of Pam Suri Productions plans for high profiled UK  Bollywood concerts , giving audiences around the UK the opportunity to see some of the most influential artists.

Born in Delhi In 1972, Anand Raj Anand left the family business and travelled to Mumbai to pursue musical career.

In 1995, his first private album “Babu Tiptop” with Time Music became an international hit this was followed by another hit album “Jhanjharia Aise Chhanak Gayi” later used in film Krishn.  In 1996 Anand Raj Anand wrote, composed and sang the songs for the film Masoom, in the same year the song ‘’Chhota Bachcha Jaan Ke’’ became an instant hit along with Kale Libaas Mein and ‘’Tukur Tukur Dekhte Ho Kya’’. The Hit parade continued with the success of the title track of ‘’Ghoonghat’’.  Since then, Anand Raj Anand has been a music director and composer of over 90 films, the lyricist of over 40 soundtracks, and playback singer for over 45 films.

Some of Anand Raj Anand most famous work includes Masoom, Pardesi Babu, Had Kar Di Aapne, Jis Desh Mein Ganga Rahta Hai, Kaante, Musafir, Welcome, Shootout at Lokhandwala, Double Dhammal, Singh Saab the Great and Shootout at Wadala. The Kaante album was a chartbuster of its time, awarded and nominated in most of the prestigious awards.

Official sound track DIL DE DIYA HAI from film Masti is said to be one of the most romantic songs in the Indian film industry.

undoubtedly one of the most

and performer to date. It is

great to bring such musical

talent to the UK

In 2010 Anand Raj Anand produced the Anthem for Common Wealth Games along with performing in the opening ceremony.

Also featuring in the UK concert is Rekha Sawhney, trained under the powerful guidance of Shaheen Khan in London and Suresh Wadkar in Mumbai, Rekha won UK’s Indian Idol and competed against some of best singers in India, as well as being chosen to sing for Andrew Lloyd Webber in his search for Maria from The Sound of Music.

Pam Suri CEO of Pam Suri Productions commented “We are proud to be hosting Anand Raj Anands UK concert. Anand Raj Anand is undoubtedly one of the most gifted singer, music composer and performer to date. It is great to bring such musical talent to the UK; we aim to entertain our audience with an evening of Bollywood extravaganza with a mix of music, glamour and dance. Music and entertainment unities people around the world and we hope this marks the first step in our long-term vision in music events and projects.’’