It’s quite apt that on the day Bollywood director Karan Johar announces his new fatherhood role to the world – twins via surrogacy, I’m attending the final show of Alison Chadwick’s directorial, Dadism. Written by the creator of “The Dateless Wonder”, Anjali Mya Chadha, this one man show, in the Watermans Theatre in London, starring Jason Kavan is a light hearted yet sincere insight into the role of the ‘non-carrying’ parent, the Dad!

What’s apparent in the first five minutes of the show, is that you don’t have to be a parent to be engaged in this hilarious comedy. The tone of the narrative sits firm as Jason Kavan takes the audience into a journey of ‘becoming’ the dad as opposed to already being that parent the minute a child has been conceived. To clear any misconceptions, this story is certainly not that of an alpha-male anti-feminist overgrown man-child craving attention, far from it! Jason’s story of a proud father-to-be is a universal echo of a father’s vital role in parenthood which goes beyond being just the sperm donor. 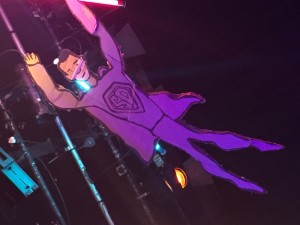 On many occasions, there are nods in unison within the audience, as we witness the comical yet very real societal expectations millennial couples feel pressured to conform to, from the ‘right’ time to having a child, the ‘right’ time to announce a pregnancy to choosing the ‘best’ birthing method. It’s not just the expectant mothers who question their ability to carry through the welcoming of a new life in the ‘right’ way, but fathers too.

Dadism cleverly narrates the daunting aspect of the pregnancy process through the eyes of a first time father, as he slowly watches his identify change from name to noun and sometimes sheer invisibility, a fear that I’m sure must resonate amongst many new fathers. Amongst the fits of hysteria in the seventy minutes, the play doesn’t fail to highlight the serious issue of the lack of both social and systematic support in recognising the integral role of the non-carrying parent. Limiting a new father’s visitation hours post the birth of a child, the not so subtle “It’s ok if daddy can’t attend the midwife visit” throwaway yet harmful comments, all play part in downplaying the importance of being dad. More importantly, a partner’s moral support is heightened and imperative on making key decisions such as birthing methods, or as Jason said, “The midwife showed us the water-birth option, all I could see was a paddling pool from Argos.!”  It helps to have a voice of reason when an expectant mother’s hormones are raging faster than Speedy Gonzales!

Jason Kavan and comedy come hand in hand. He couples his quick wit and comebacks with the audience members to keep us engaged and captivated. Whilst there is no distinct reference to this subject just being confined to fathers of an ethnic background, Jason cleverly depicts his moment of being stopped, as a man of colour, by the police in the city as he was holding a ‘suspicious’ looking brown bag (i.e. his sandwich) in a complete light hearted manner.

The duo of director Alison Chadwick and writer Anjali Mya Chadha reflects the strong chemistry of their partnership. The slick and sharp direction is complemented by Anjali’s funny yet sincere and honest writing. It’s refreshing to see a male oriented subject bourne from a female perspective and Anjali and Alison have certainly created that niche. What’s beautiful about Dadism however, is that throughout the setbacks while trying to be recognised as an equal, the concept of a new life is constantly perceived with such a celebratory view by the protagonist. The question on everyone’s mind is… what happens next.? Here’s to the next chapter!