Bollywood Review in Conjunction with VUE 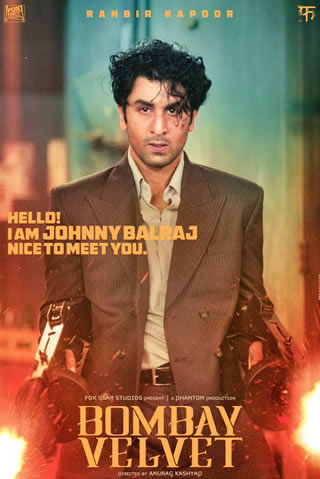 Director: Anurag Kashyap
Cast: Ranbir Kapoor, Anushka Sharma, Naseeruddin Shah, Kay Kay Menon, Karan Johar
Bombay Velvet is the first of a trilogy of films planned by director Anurag Kashyap. It is based on Gyan Prakash’s book Bombay Fables.
It showcases how a city becomes a metropolis set against the backdrop of ambition, love, greed, and jazz.
It is a story of one ordinary man who goes against all odds by forging his destiny to become a ‘Big Shot’
Set in the 1960s lead stars Anushka Sharma and Ranbir Kapoor play lovers whose lives interact as the city of Bombay grows over the years.
Karan Johar makes his acting debut as the evil Kaizad Khambatta, a rich but dangerous businessman who will stop at nothing to get what he wants. He plays a significant part in the life of Ranbir Kapoor’s character.
Anushka plays the role of Rosie a 60s’ jazz singer in the Bombay Velvet nightclub. Meanwhile Ranbir is playing the role of a street fighter and risk taker Johny Balraj. He received training in Martial Arts for his role.
Donned with a 1960s look Bombay Velvet looks like a cross between the life of the American gangster Al Capone and a Broadway musical.
With young Ranbir Kapoor leading the way the film could very well turn out to be a surprise package at the UK box office upon release.
Jazz clubs, a passionate love story, a growing metropolis and a phenomenal hunger for a good life. Welcome to the City of Dreams. Welcome to Bombay Velvet.