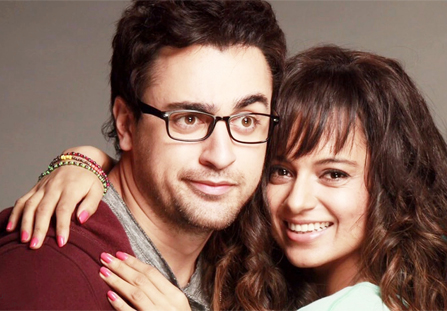 
Katti Batti is a modern day romance that shows a live-in relationship so common in India these days.


It takes a look into the lives of a young architect Madhav (Imran Khan) and his love for the free-spirited artist, Payal (Kangana Ranaut).


They make a perfect couple blissful life. But a sudden turn of events creates an unanswered distance between them.


It all starts when Payal gets pregnant. It’s an occasion to be happy but instead it creates complications between the couple.


Payal and Madhav have a different outlook in life because they come from different backgrounds. So this causes a clash of ideas between the couple.


Madhav agrees to marry Payal when hear that she is pregnant because that is the most sensible thing to do. But she turns him down!


So what follows is a series of incidents testing the fate of their relationship.


Katti Batti is a rather contemporary romance set in modern day India. It involves a turbulent relationship resulting in separation. But is their love strong enough to bring them back together?


This heartwarming urban story focusing on the Indian culture based on today’s generation has been seen before in films like Jaane Tu Ya Jaane Na, I Hate Luv Storys and Ek Main Aur Ekk Tu.


But the difference with Katti Batti touches the hearts of audiences because it is a slice-of-life film which they can all relate to.


Nikhil Advani is one of the finest storytellers we have in Bollywood. Once again he takes the director’s helm with Katti Batti. So we can very well expect a thought provoking but at the same time entertaining ride as we follow this couple’s journey.


Kangana’s popularity with audiences has increased over the years with power packed performances in films like the woman-centric Queen and rom-com Tanu Weds Manu franchise.


This time round she pairs up with Imran Khan for the very first time. Imran plays a straight forward easy going guy hopelessly in love with Kangana’s feisty, domineering and impulsive character.


Unlike other rom-coms the film unfolds at a gradual space but the format is more of a thriller grabbing audiences’ attention from the very first frame.


The difference here is that after the couple falls in love, the girl suddenly disappears. This brings about a mystery element on who she is and where she has disappeared to. And that makes the main premise of this film.


On the whole fresh pairing of the lead stars and an unusual urban storyline not tackled before in Bollywood makes Katti Batti an interesting watch for cinemagoers keen to see something different.