“Did you cheat on her, beat her or both?” this is just one of the many stereotypes that rom-com film Finding Fatimah’s male protagonist, divorcee Shahid, is faced with on his journey to find his soulmate.

Oz Arshad’s directorial takes us through the seeking soulmate process between two Muslim millennials, based in the bustling city of Manchester.  Starring Danny Ashok and Asmara Gabrielle, these singletons’ quest to find love in the digital era of Internet dating takes the audience through a rollercoaster of emotions, often humorous yet enlightening, reminding us that true love is not always exempt from societal created boundaries. 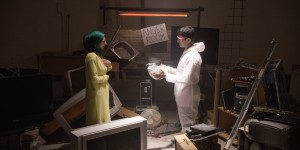 Finding Fatimah attempts to inject normality into its characters immediately, where we witness in the opening scene, an almost 30 year old Shahid stating in a wishful yet honest online dating video, that all he wants is a companion to share his joys and downfalls with. What he conceals on his video from his potential female love-interests, however, is his divorcee status! Coupled with a failing business and lack of self-esteem, it’s impossible not to feel empathetic. 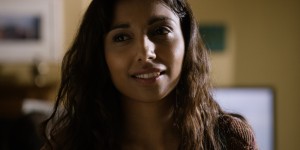 Across the other side of the internet screen there’s Fatimah, a confident and successful doctor who has also joined Cupid’s digital queue after failing to come across a suitor. Whilst she may not be short of admirers and prospects introduced (and caste-approved of course) by her parents, it is Shahid who is drawn to her wit and sincerity as he marks his interest in her profile and she coyly reciprocates. As Fatimah eventually confides in Shahid on her anger management issue, especially towards liars, the audience are drawn into how the layers behind these digital personas start to unravel.

Shahid’s display of vulnerability and depiction of raw emotions is a refreshing change to the typical alpha South Asian male portrayal, reflected in the scenes between Danny Ashok and his character’s mother, played brilliantly by Nina Wadia, as he allows her to comfort him in his moments of despair. As he finds an outlet via comedy in an attempt to become a stand-up act to express his daily divorcee dilemmas, it’s his humour that eventually becomes his self-therapy. 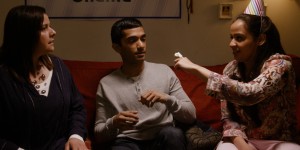 Asmara Gabrielle’s role as Fatimah cleverly illustrates that her secure, strong, and independent stature doesn’t force her to suppress her fears of whether she will ever meet “The One”. Yet it’s her strong composure that helps Shahid to build his self-confidence, complimenting each other as the yin to his yang! But is his secret status about to change that?

The narrative is light-hearted in its tone, and whilst the main characters are from Muslim backgrounds, the film shows how easy it is for an individual’s insecurities to be shielded behind the internet which is universally applicable. Breaking stereotypes is a pattern followed through by many of the characters, including that of Shahid’s mother, who refuses to let her widow status define her by dating a much younger man in the form of actor Jason Kavan; always a welcoming appearance! 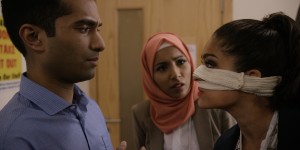 The Bollywood-esque cliché’s of declaring unrequited love in an unrealistic scenario is slightly cringe-worthy but almost forgivable, as the film brings added much needed humour with Mandeep Dhillon and Wahab Sheikh taking on the roles of best buddies of the unlucky in love couple.

So is Finding Fatimah the turning point on how not just British Muslims, but British South Asian millennials are represented in cinema? The Asian Today speaks exclusively to writer and director of the film, Oz Arshad. 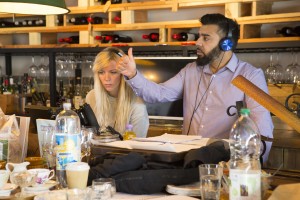 How did the concept of Finding Fatimah arisen and do you feel it is reflective of the British Muslim millennial generation?

“I was commissioned by BMTV who wanted to make a movie and the brief was a Muslim centric rom-com specifically for a Muslim Family audience. They wanted it to focus on the non-physical side of the relationship of the characters as they wanted to take it on a UK charity tour. Given the brief I wanted to ensure two things, firstly, that this movie is a very British story and secondly, I make it as appealing as possible to a wider audience without compromising the brief. I totally believe this reflective of the British Muslim millennial generation. It’s a story about how two millennials in the community overcome cultural hurdles to find love in 2017. I did extensive research over 9 months and followed 12 totally different British Muslims looking for marriage prior to writing the script.”

Riz Ahmed and Meera Syal have recently spoken out about the lack of British Asian representation in mainstream media – do you think that independent cinema can be the steering needed to change that?

“Yes I do believe independent cinema can steer that change. Our movie has a talented cast of Asian actors and actresses that you may not necessarily see in one production elsewhere in mainstream UK productions. There is an appetite for organic British Asian movies and independent cinema is the only route to showcasing.”