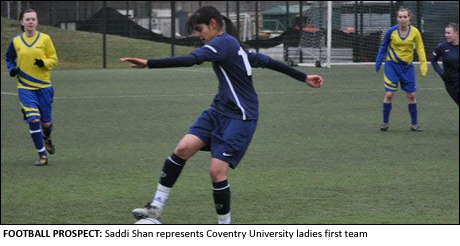 THE famous movie Bend It Like Beckham is a story of every football-mad Asian girl’s dream.
But while the adventures of Jesminder “Jess” Bhamra are fictitious, there are many real-life stories out there of Asian femmes making an impact on the soccer stage.
One such example is Saddi Shan, a 21-year-old prospect being tipped for international honours.
In her younger years Saddi attended Bordesley Village Primary School and aged nine was the first girl in the area selected to join the Gifted and Talented scheme.

Her talent further blossomed when she trialled for Aston Villa’s Under-11 squad.

Later, attending a girls’ school did not keep Saddi away from the sport she loves.
She captained Sutton Coldfield Grammar School for Girls, the team winning the Keele Cup and Regional Seven-A-Side Power League Tournament three years running.

PE teacher Mrs Peel was the force behind the girls, making it possible for the team to participate in tournaments by providing transport and she referred Saddi to academies at West Bromwich Albion and Birmingham City football clubs.
Saddi grew up playing alongside her brothers and people in the community in her local park on many an evening up until twilight.

However, things are not always easy living in a Muslim-Pakistani family, as girls wearing shorts outside of school can be frowned upon.

After a spell away from the game, Saddi returned in 2008 and made history by becoming the first ever Asian girl to join West Midlands Regional League Premier Division team Solihull Ladies.
She assisted the team to the edge of promotion, with second position achieved in 2010 and 2011 and third in 2012.
Saddi is confident this year will be the best yet as the team stands top of the league and this could lead to playing at a higher standard next season and the possibility of facing world-class players she once looked up to.
Saddi has won countless medals, trophies and certificates since debuting for the club, including a League Cup winners’ medal.

For a young girl who started off kicking a ball about in the parks dreaming of playing football at the highest rank, it was an amazing feeling for Saddi when aged 19 she was offered a scholarship in America with FirstPointUSA.
Exciting times, but she was unable to take up the offer due to financial circumstances, lack of support, prejudice and family who did not see such an adventure as a norm. Saddi was only left devastated.
“Sometimes good can come knocking at your door, but it’s not always easy living the dream when in reality the mechanisms are not there,” she said.
An opportunity missed, but this setback did not discourage the young star.
Instead she came back stronger, and realised it is also good to do more for others.
She undertook voluntary work as a community sports leader and made time to referee local tournaments and coaching when required.

Now a student at Coventry University, Saddi leaves no gap in making the most of her football-playing opportunities.
She represents Coventry University ladies first team, and working at Warwickshire County Cricket Club and her all-time favourite Birmingham City FC gives her the chance to meet other great sports personalities and offers the opportunity to travel with teams when on tour.

In August 2012, Saddi was part of a record-breaking event.

The women’s 20-hour futsal marathon record was hosted in Birmingham by sports personality and close friend Salma Bi, the first Asian female to play cricket for Worcestershire Women county side.

Salma, who overcame many hurdles of her own before making her mark in the world of sport, explained: “Things can be difficult to always begin with, but this is how dreams are achieved and when you are dedicated gradually others begin to believe in you and begin to see what you want from life, the goals and the reasons why you do what you love.

“With time things get easier and everyone makes a path for themselves.
“In Saddi’s case the acceptance of playing football came while playing at school and her father arrived earlier than usual to collect her. He witnessed the talent Saddi actually has. This has helped her in many ways as he saw first-hand the passion Saddi has for the game.
“She is still young, a university graduate and still has the potential to play in the States.

“There are countless opportunities for Saddi yet to come but a lot more difficulties to face too. She sees football as her ultimate goal. If one door doesn’t open we are certain Saddi will find another door instead.

“We can only support more and more Asian girls to follow in these footsteps and we also need more and more role models so the journey is begun at an earlier age.
“Restrictions will always be in place, but it is down to you to go beyond your own expectations to achieve your goals.
“It’s being recognised which is the crucial step and this is why young baller Saddi deserves to rub shoulders with top players.
“If anybody can achieve their dreams we know Saddi Shan can!”

Make me an Indian Soap Star!