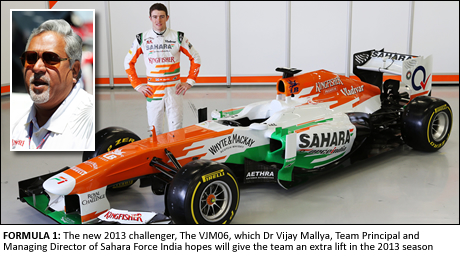 SAHARA Force India has unveiled its 2013 challenger at Silverstone circuit.
The VJM06 is the third car to be overseen by Technical Director, Andrew Green, and builds on the strengths of the 2012 car. With stable technical rules the car is more evolution than revolution with the removal of the ‘step’ nose being the most obvious visual change.
Team Principal and Managing Director Dr Vijay Mallya said he was “proud” of the team’s new creation adding there is renewed optimism ahead of the 2013 season.
Dr Mallya, the new season is upon us. How excited are you to see the VJM06 come to life?
I think everyone in the team is very excited about this car and eager to go testing and see where we stand. With stable technical rules the VJM06 doesn’t look massively different compared to its predecessor, but beneath the skin we’ve looked at every detail to try and find more performance. I’ve followed the development of the car closely and feel proud of what we have achieved so far.
You’ve given great consideration to the driver line-up for this season. Are you closer to finalising things?
Paul will race with us for a third season. He has delivered some great performances for us over the last two years and gives us the consistency we need going into 2013. He had a difficult end to last season, but we’ve worked hard to understand those issues and I believe he can step up another level this year. As for his teammate, we had a shortlist and have considered every driver who is available. We are very close to making our decision and I can assure you that we will arrive in Australia with one of the most exciting pairings on the grid.
You announced an investment programme for the team late last year. How is that progressing?
The programme is underway and we are currently looking for the land to build our new wind tunnel. The team has done a remarkable job with the resources that we already have, but if we want to realise our long-term ambitions we need to give our engineers the best tools available, starting with a state-of-the-art wind tunnel. The more immediate benefits of our investment are already in place for 2013 with greater CFD capacity.
What will be the objectives for the year ahead?
We begin 2013 hungrier than ever before. We ended last season with a very competitive car and we even led for 30 laps in Brazil. That’s given everyone a taste of what it feels like to race at the front and shows what we can achieve when everything comes together. We were unlucky to miss out on a podium last year on several occasions so that is certainly a clear ambition for the year ahead. The first objective is to hit the ground running and have a strong start to the season. That’s been our weakness for the last couple of seasons so we need to build on the momentum and carry on where we left off in 2012.

“London Dreams is a film with a heart!”

Bollywood Throughout The Ages

Middle-aged? 5 Myths about your fitness.

Doctors Say She Is In ‘Super Urgent’ Need of Liver Transplant