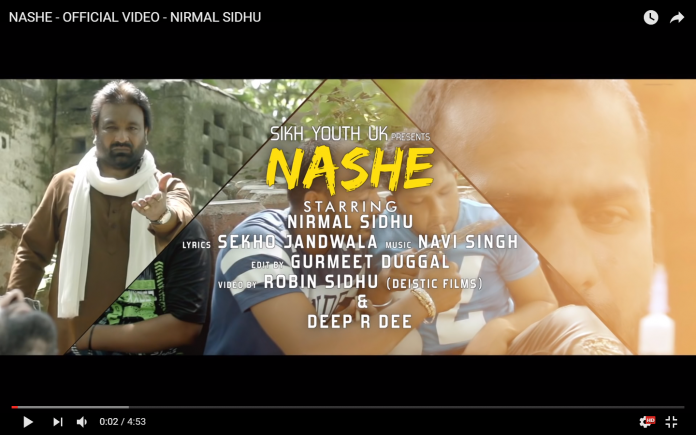 Nirmal Sindu’s latest musical venture in conjunction with Sikh Youth Birmingham centres around one of the biggest issues that modern India is facing: drugs.

Punjab in particular has been blighted by large scale drug abuse, with a study back in 2010 revealing that a staggering 70% of males were addicted to drugs or alcohol. Six years later, that figure has only grown.

To tackle the addiction, Sikh Youth Birmingham collaborated with numerous artists to create Nashe, a mid-tempo song with yearning lyrics and vocals that show the struggles of addiction on drug abusers, their families and the wider community as a whole. It crosses continents, portraying common drug tales in India and the UK, and even broaches how the drugs epidemic has affected young girls and helped to grow the sexual grooming industry.

It’s no secret that Punjab has a drug problem, but it’s not just the poor that are affected. Drugs, mostly illegally imported from the nearby border with Pakistan, have found themselves in all sectors of Punjab, most especially in schools and colleges. It’s also crept in through Rajasthan whilst synthetic opioids flow in from the east.

The video portrays the wealthier injecting heroin, the poorer burning a low-grade form of the drug on tinfoil then inhaling it.

Singer Nashe tells this story of strife whilst standing in a lush, green field. These fields, the root of the problem. Punjab initially grew its wealth via agriculture, a sector that saw past generations amass hordes of capital. But modern day Punjabis have no such avenues to money. Due to a declining water table and reduction in farming, the current generation has no such avenue to prosperity. This is one of the theories as to why the youth have become latched onto drugs. As with many impoverished areas with little chance for opportunity, it simply provides something to do.

More sinisterly, it can be used to create money. In one harrowing moment of the music video, a young British girl is tricked into getting into a friend’s car and then drugged. She ends up at the mercy of groomers and rapists, her kidnapper selling her to fuel his addiction.

Sikh Youth Birmingham is putting all profits from the song into The Alcohol and Drugs Project. SYB has helped numerous addicts ditch the drug, aiding them through recovery and supporting them back into employment.