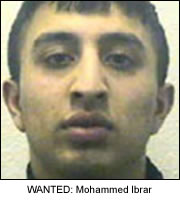 WEST Midlands Police have today released a picture of a man wanted in connection with a hammer attack on a man in Birmingham in February.
Mohammed Ibrar, aged 23, is wanted in connection with a serious wounding which occurred on 26 February 2007 in Bristol Road South, Rubery, Birmingham, when a man was attacked with a bricklayer’s hammer, receiving major head injuries.

One man has already been arrested in connection with the attack and charged with attempted murder, but police would also like to speak to Mohammed Ibrar.
Anyone with any information about the two men are asked to call West Midlands Police on 0845 113 5000 or Crimestoppers anonymously on 0800 555 111.