Home Uncategorised Singer to make a jump for Charity! 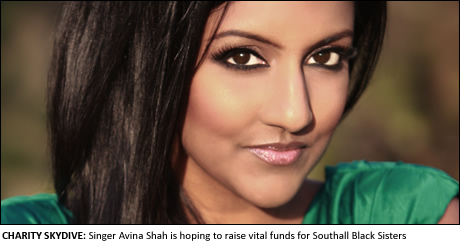 BRIT singer Avina Shah is gearing up to jump out of a plane – all for charity!
And she’s set to make the 13,000ft dive on her birthday.
Avina together with managing company, Eastern Illusion and colleagues are set to Skydive in support of Southall Black Sisters Charity. This charity fund raiser follows on from the successful release of Avina Shah’s debut single ‘Tere Bina’ (Without You) to raise awareness of the delicate issue of domestic violence.
Avina donated the proceeds from the single to West London based charity the Southall Black Sisters (SBS).
Inspired by the story of Kiranjit Ahluwalia, featured in the hit movie ‘Provoked’ starring Aishwarya Rai, ‘Tere Bina’ aimed to not only entertain music lovers but also empower listeners who can relate to the emotive meaning behind the song. It told the story of a young woman who finally walked away from a very violent and abusive relationship.
“I have chosen to skydive out of a plane to fully understand the meaning behind a saying I recently heard – ‘A life lived in fear is a life half lived’,” Avina said.
“This will be my biggest challenge to date, anyone would fear jumping from a plane but I’m slowly gearing myself up to do this. I am supporting an amazing charity close to my heart after my debut single Tere Bina so please show your support too and donate now.”
Since the release of her second single ‘Dil Deewana’, Avina has been busy in the studio working on her new set of singles to be released over the next coming months.
The UK summer season is going to be a hectic period for Avina with the new releases, charity work and opportunities for fans to see Avina perform live across the UK at Mela’s and international events in Europe, Asia and Middle East.
Avina is hoping to raise a minimum £4000. The Skydive will be captured on video for fans to see and will be scheduled to take place as soon as the target has been achieved.
If you would like to help Avina reach her target log onto https://www.justgiving.com/EasternIllusion-Skydive