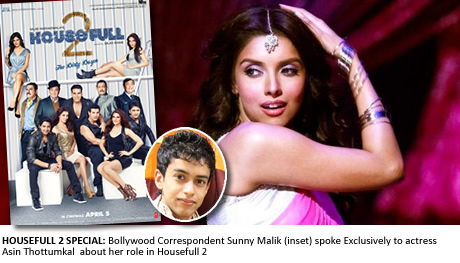 BOLLYWOOD Reporter Sunny Malik spoke exclusively to Asin Thottumkal about her upcoming film Housefull 2 – The Dirty Dozen. The actress talks here about her role, experience of shooting in the UK and much more…
Can you tell me a little bit about your film Housefull 2?
Housefull 2- The Dirty Dozen has no similarities with Housefull, it’s an entirely new story although there are actors who are in both films. The characters are completely new, they are very different compared to those from Housefull. The only similarity is that a lot people come together under one roof. Housefull 2 is about fathers, daughters and it’s about these four friends and their interrelationship and confusions which are created. That’s what the film is about. It’s obviously a comedy, an entertainer, a mainstream commercial film.
Describe your character in the film.
I play a girl called Heena and she is the daughter of Rishi Kapoor in the film.  We are a family who live in London and have an extended family here as well. Rishi Kapoor has a brother in the film, played by his real life brother Randhir Kapoor. In the film they are called Chintu and Dabboo. Randhir Kapoor plays my uncle and he has a daughter, Bobby who is played by Jaqueline Fernandez. So, she is my cousin sister and we two families are constantly at war with each other. They are at loggerheads with each other even though they live under the same roof technically.

My character is an animal rights activist. She works for an organization called LAW which means Loving Animals Worldwide.  That’s about my character in the film.
You’ve worked with Akshay Kumar now after working with Aamir, Salman Khan and Ajay Devgn. How was your experience shooting with the Khiladi?
Akshay is a lot of fun. I think he is a good balance of professionalism mixed with fun. He is very disciplined about maintaining himself, about his work, about his punctuality yet he is a prankster, very laid back, has a good sense of humour and a wonderful comic timing and is witty. So, I think he is a good balance of professionalism mixed with fun and being chilled out and it was amazing working with such a person.
You shot the film in London but also in Peterborough and other parts of the UK. How different was it to not shoot just in central London locations?
It was amazing. We shot at a house which was an hour drive away from London. That’s where we are supposed to be living, Rishi Kapoor’s family and Randhir Kapoor’s family. We were all staying in the city but used to drive down to the house every day to shoot. I am somebody who lives drives and somebody who absorbs everything around me. Just working with a new set of people, in a whole different atmosphere outside of London was an amazing experience for me.  We used to have our lunches together in that house and we are all chatting all the time. I think, just that location helped us bond really really well.  The fact that we were shooting outside of India, where all the actors used to get together and we would just interact, talk, bond and build personal rapports with each other was amazing and was the best part of having shot the film there.
It’s a multi-starrer with four heroines: Asin, Jacqueline, Zarine and Shahzan. Do you think that brings out competition as the audience starts to rate who looks better and who is a better actress?
Oh No, I am least bothered about these things and I am only concerned what my character is in the movie and as long as that as clear I am happy and I don’t have any other thoughts or insecurities in my head. In fact, all four of us bonded really really well. We are on each other’s BlackBerry Messenger, we are constantly messaging each other even though the shoot of the film has wrapped months ago. Whether we are promoting the film or not, whether we are shooting the film or not, we are constantly in touch with each other. We have really created a strong friendship amongst each other and I don’t think there are or were any insecurity from my part of any other girls. I really think that helped the film as well.
After working in big films like Ghajni , Ready and London Dreams, you chose a multi-starrer like Housefull 2. Why did you decide to be a part of this film?
That is exactly the reason why, because it is a mutli-starrer and I had not worked in one. Of course, I worked in London Dreams but it was not really a multi-starrer but had Ajay and Salman in it. This was the first time I was given a film with multi-heroines.  Just being part of an experience like this or just the fact that both Sajids, the producer Sajid Nadiawala and director Sajid Khan, have a successful track record in this kind of commercial cinema. I thought that I should try my hand at it and wanted to be part of a so called Bollywood multi-starrer and I don’t think that there has been any other film at this big scale. The film brings together the veterans of an era, it brings four boys and four girls together and I thought that it would be an experience to be part of this film.
Do you think for the UK audience, Housefull 2 is a film where they need to leave their brains at home ? Or is the film an intelligent comedy?
Yeah, I think it is a very unpretentious film. It is about entertaining the masses. You have to come with that mentality. Sajid Khan, the director has a pulse on what the audience likes and he likes to cater to all age groups. That is why he used these animal sequences for children, we have romantic scenes for adults, we have fight sequences for boys, we have father-daughter relationships for the family audience. Sajid had tried to keep it interesting for the different age groups but keeping in mind the masses.
Following the very successful Housefull, Eros international, Producer Sajid Nadiadwala and director Sajid Khan have teamed up once again to release their latest venture, Housefull 2 on the 5th April 2012 across the UK. Housefull 2 – The Dirty Dozen stars Randhir Kapoor, Mithun Chakraborty, Rishi Kapoor, Johnny Lever, Boman Irani, Akshay Kumar, Ritesh Deshmukh, John Abraham, Shreyas Talpade,  Asin Thottumkal, Jacqueline Fernandez, Zarine Khan and Shahzan Padamsee.