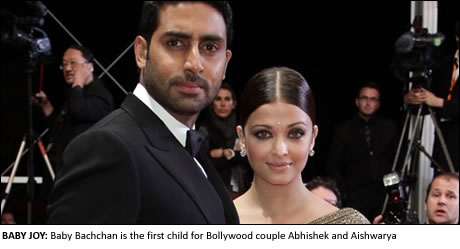 BOLLYWOOD couple Aishwarya Rai and Abhishek Bachchan are celebrating the birth of a baby girl.
The baby, which is the couple’s first child, was born at the private Seven Hills hospital in Mumbai this morning.
With the world’s media waiting for news it was proud dad Abhishek who broke the news on Twitter, telling his followers ‘It’s a girl :-)’.
He later wrote he was too excited to get some sleep after spending much of the night at his wife’s bedside.
‘Thank you all for your prayers and good wishes,’ he wrote on Twitter. ‘Both Aishwarya and the baby are doing great and taking some much needed rest…and I’m trying my level best to get rid of this caffeine high and get some sleep too. Don’t think it’ll work. TOO EXCITED!!!’
His father, Amitabh Bachchan also took to the micro-blogging site to share in his delight at becoming a grandfather.
‘I am Dada to the cutest baby girl!!’ he wrote.