Akshay Kumar and John Abraham team up for Desi Boyz 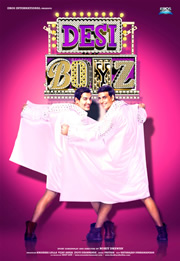 Director: Rohit Dhawan
Cast: Akshay Kumar, John Abraham, Deepika Padukone,
This comic fare goes back to 2009 when the world is struck by financial meltdown. But Nick Mathur and Jerry Patel don’t feel a thing in their comfortable London-based flat.
Nick feels smug with his successful investment banking job, the new bonus in his pocket and his beautiful fiancé, Radhika, by his side.
As for Jerry he is so used to scraping the bottom of the barrel and living off his best buddy Nick that recession feels like home. But life soon pulls the rug from under his feet.
Friendship breaks up between the lads when Nick decides to unceremoniously fire his best mate from his flat.
What’s more Jerry is informed by the Social Services that his nephew Veer, whose local guardian is Jerry, will be placed in a foster home unless he gets a steady job.
Desi Boyz is the story of two men who are forced to do something extremely bizarre which gives them instant gratification but the repercussions tear them apart and its aftermath which tests everything including their friendship.
In the movie Akshay and John play characters a decade younger than their real age. So ranging from sets, costumes, dialogues to their behaviour has been worked upon in great detail to achieve that younger look.
Whilst Sanjay Dutt makes a special appearance, no expenses have been spared with regards to shooting the most expensive song in the movie.
The song appearing in the opening credits will be action-orientated involving helicopters, high speed bikes chases, fire-ridden warehouses and aeroplanes. And that’s something to look forward to in Desi Boyz besides a novel script full of nice surprises!