‘Diary of a Badman’ YouTube series viewed by millions 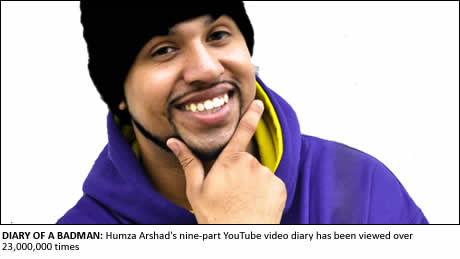 INTERNET comedy sensation Humza Arshad will be headlining a nation-wide university comedy tour this month.
Humza is the UK’s most popular British Pakistani comedian after receiving millions of views for his ‘Diary of a Badman’ series on YouTube.
The video diary chronicles the life of a self-styled ‘Badman with seriously good looks’ as he attempts to impress girls, survive marriage offers via Skype and escape the wrath of his rolling pin-wielding mum.
The nine-part series has been viewed over 23,000,000 times on YouTube.

“Hopefully, the tour will show that British Pakistanis are about more than just kebab shops and taxis. Although, let’s face it, we do it best!” said Humza.

The tour is being organised by Azme Alishan a Pakistani campaign that aims to shift perceptions about the country and its culture.
A tour spokesman said the campaign wanted to bring Humza to a wider audience.

“Humza uses his Pakistani heritage to bring something special to his comedy,” the spokesman said.
“The Azme Alishan campaign in the UK is really excited to be part of the Badman phenomenon.”

Despite his massive appeal amongst young people of all backgrounds, the tour will be the first time Humza takes his act nationwide.

The tour will feature Humza treating fans to unseen footage from his YouTube series as well as live versions of Humza favourites such as the comedy track “Jam that Hype” and the Badman VS Mum rap battle. Humza will also be joined on stage by the rest of the Badman crew, including singers JP (aka Dexter) and Kalum as well as Yogi and Asif.

Following opening night in Bradford on 24 November, the tour will go on to Glasgow, Manchester, Birmingham, Liverpool, Staffordshire, London and Cardiff.
For full details log onto www.badmantour2011.co.uk