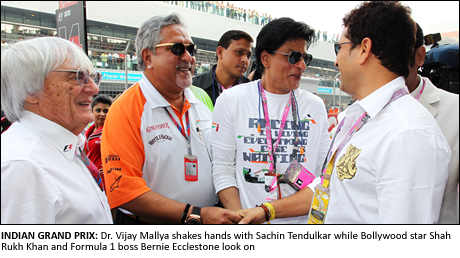 THE man who made India part of Formula 1 has revealed his pride at seeing the sport take to the streets of his home nation for the first time last month.
Dr. Vijay Mallya, Team Principal and Managing Director of the Sahara Force India team said seeing the Buddh International Circuit brimming with fans was a “dream come true.”
While an estimated 95,000 fans packed into the stadium, in amongst the action on the ground cricket stars and Bollywood actors joined in on the party atmosphere.
“It was outstanding. It was emotional and there was a great sense of pride,” Dr Mallya said.
“It was a dream come true. When Force India became the first and only Indian team on the grid in 2008, it was a great moment for me too, but even at that time I really didn’t think that India would ever host a Grand Prix.
“It couldn’t be better; it was like the confluence of two dreams: owning an F1 team and racing on home turf.”
The Buddh International Circuit also drew praise from a number of other drivers.
Brit Jenson Button said he was amazed at the circuit.
“I loved the whole experience,” Button said. “And I think every driver will be excited about coming back here because it’s such a phenomenal circuit; fast and flowing with a bit of everything. It gets a big tick from me.
“The Indian people have really welcomed us to their country; I’ve never seen so many people smiling before. And the crowd has been wonderful. I hope that Formula 1 grows in India in the future and that we get an even bigger crowd here next year.”
The day also saw Sahara Force India announce the winner of their One from a Billion hunt -a competition aimed at finding future F1 Indian drivers.
Youngsters Arjun Maini, 14, Tarun Reddy, 14 and Jehan Daruvala, 13, were announced as the top three winners and will now take part in a fully funded European-based driver development programme with a view to becoming F1 drivers.
Dr Mallya admitted he received criticism in India for not using Indian drivers during the F1 season.
“Everybody has been quite critical of me, particularly in India, as to why I don’t have an Indian driver in the car,” he said.
“They’re trying to force comments out of me on the two Indian drivers that we currently have and I’m not going to fall into that trap. All I know is what’s good for my team and that’s what I’ve been doing. But I’ve often said that amongst 1.2 billion people there’s got to be a Lewis Hamilton somewhere. We found three exceptionally talented kids, all 14 or under.”

Pakistan board keep faith with Malik

He often wants you, or he doesna��t. However you need to make yes the guy knows wherever your stand-on this subject.

Kai Bhullar – A Star in the Making