Home Uncategorised Win a Copy of Everywhere + Nowhere on DVD 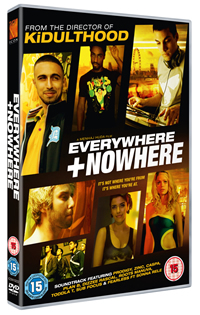 EVERYWHERE and Nowhere, the brilliant film from Brit-Asian director Menhaj Huda comes to DVD this month and we’ve got three copies to giveaway.
Ash (James Floyd – The Infidel) is a young Asian guy growing up in London who’s torn between fulfilling his traditional family duties and following his dreams of becoming a DJ.
Everywhere and Nowhere features an outstanding cast of raw young Brit talent including Anuvahood’s Adam Deacon, The Inbetweeners’ James Buckley and Blue’s Simon Webbe alongside veteran actor Art Malik.
With an original bad boy soundtrack including traditional Bollywood hits remixed by the likes of Engine-EarZ, Sukh Knight and Nerm & D-Code and some hot club bangers, it comes to DVD on 3 October 2011.
To get your hands on a copy of the film, just answer the following question:
James Floyd, who plays Ash in Everywhere and Nowhere, stars in which of the following films:
A) Bend it Like Beckham
B) The Infidel
C) East is East
If you think you know the answer e-mail competitions@theasiantoday.com with your full name, address and the answer before 28th October 2011.
Winners will be chosen at random and notified by e-mail by The Asian Today