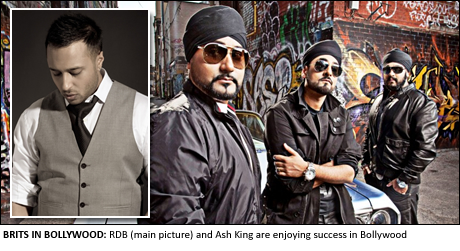 IN packed cinema screens across the country countless British Asians are tucking into their popcorn as the sights and sounds of the new Bollywood film ‘Bodyguard’ are played before them on a giant screen.
One of the films most popular songs ‘I Love You’ starts playing. It’s been viewed over 1.7million times on YouTube and has been regularly positioned in the Top 10 on the iTunes World Music chart.
What’s unique about this track in particular is that vocalist Ash King is British, and the songs huge success is signalling how Bollywood is increasingly turning to Britain in its quest to produce blockbuster soundtracks.
‘I Love You’ doesn’t signal Ash’s first foray into Bollywood.
The West London singer has already contributed songs to three other Bollywood films– Delhi-6, Aisha and Dum Maaro Dum.
And his involvement in Salman Khans ‘Bodyguard’ is even more remarkable considering the A-list actor personally requested Ash’s involvement on the soundtrack.
Speaking about his involvement in ‘Bodyguard’, Ash explains: “I was in Kolkata with my dad and I got a call from Pritam (music director who produced ‘I Love You’) as he heard I was there from a mutual friend. He then flew me over to Mumbai and I was in the studio as soon as I landed recording ‘I Love You’.
“The song was also originally sung by a very famous Bollywood singer. The stylist for the film recently visited London and told me he was actually there when Salman heard my version of the song and chose it for the film! I’m very grateful to him and the team for choosing my version and have heard it’s getting a great response in India and has gone to number one on the Asian music charts in the UK as well!”
Bollywood’s infatuation with British Asian acts isn’t a new phenomenon.
Jay Sean – now a Number One selling artist across the world – contributed the track ‘Dil Mera’ to the soundtrack of the 2005 film ‘Kyaa Kool Hai Hum’, while Birmingham rapper Hard Kaur has become a regular on the Bollywood scene, contributing to nine films.
One group set to ride high in the Bollywood music chart this month is RDB. The brothers – Kuly, Manj and Surj – from Bradford have already made a name for themselves in Bollywood.
Favourites of actor Akshay Kumar, the brothers composed and featured on the lead song to the hit film Singh is Kinng in 2008. Featuring acclaimed American rapper Snoop Dogg, the song was the first time a major western artist had featured on a Bollywood soundtrack – and the brothers are continuing that tradition in the newly released ‘Speedy Singhs’.
Teaming up with Grammy Award Winning artist, Ludacris, RDB have created another catchy anthem in ‘Shera Di Kaum’ that has already proved a hit amongst Asian audiences worldwide.
“We wanted to raise the bar again by forming a collaboration like no other,” Manj from RDB says.
“Previously we had the opportunity to combine the talents of Snoop Dogg and Akshay Kumar on a track which received widespread appreciation and applause. It certainly went down in history as it was never done before.”
One thing’s for sure, we’ll be hearing a lot more of the British Asian sound in Bollywood for many more years to come.