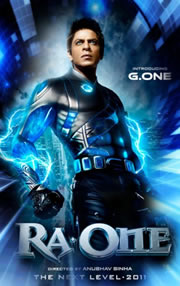 FILM: Ra One
DIRECTOR: Anubhav Sinha
CAST:  Shah Rukh Khan, Kareena Kapoor
This superhero flick starring King Khan is set in modern day London.
Software engineer Shekhar Subramaniam (Shah Rukh) is a computer geek who designs video games.
Meanwhile fashion conscious Sonia (Kareena) is Shekhar love interest with no concern about technology, computers and video games.
Sonia has an 8 year old son who has already given up on Shekhar because he is not ‘cool’ enough.
So Shekhar tries every trick in the book to woo him back. Just when Shekhar and the young lad hit a deadlock, the geek strikes gold by designing a special video game.
But all hell breaks loose when the game that was meant to be played starts playing them!
Shekhar turns into a video-game hero, G.One taking on his self-created techno-monster Ra One (Arjun Rampal). Ra One is said to mean Random Access- Version One.
‘Wanna be my Chammak Challo’ sung by the Senegalese-American R&B sensation Akon is turning out to be the most popular track on the Asian music charts of late. The song sequence sees Kareena Kapoor in a traditional outfit gyrating to the music alongside Shah Rukh Khan.
Bollywood stars like Priyanka Chopra, Ragnikant and Sanjay Dutt are also said to be making a special appearance in the film.
Produced by Shah Rukh Khan, Ra One is one of the most ambitious, expensive and technologically complex Hindi films ever made.
This sci-fi Bollywood extravaganza is expected to break all box office records upon release during this Diwali festive season!