Popular show back for another run 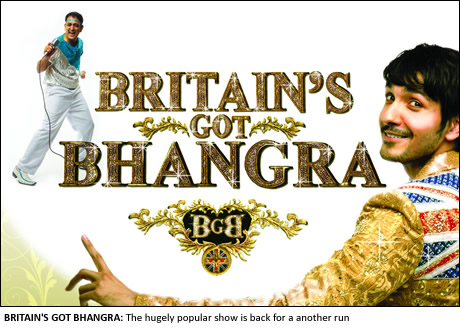 BRITAIN’S got Bhangra is back for another UK tour!
The hugely successful stage production will hit theatres up and down the country again – and we can’t wait!
Winner of the ‘People’s favourite musical’ at the Offies 2010 and nominated for Best Musical Production at the TMA awards, Britain’s Got Bhangra has been remixed and remastered for 2011 and will be embarking on an eight venue tour across the country.
Set in Southall, the story follows Twinkle (played by Shin DCS), a farmer’s son from Punjab, India who comes to England to make a better living for himself and his wife. A gifted singer, he goes from being a van driver to a star in the growing Bhangra music scene of the 80’s. This imaginative musical takes us through his personal journey of highs and lows amidst multicultural Britain and across the evolution of the music scene.
Written and directed by Pravesh Kumar of Rifco Arts, the idea behind creating the show came to him in 2005 whilst running a workshop with British Asian youngsters. They were listening to a new brand of Bhangra music, which was fused by DJs and producers with American Hip-Hop and RnB flavours, compared to the 80’s live bands and singers Pravesh grew up with. He was inspired to write this story that charts the growth and transformation of UK Bhangra.
Catch the tour here in the Midlands at the Curve Theatre, Leicester   4th – 8th October, and Warwick Arts Centre, Coventry   15th – 27th November.