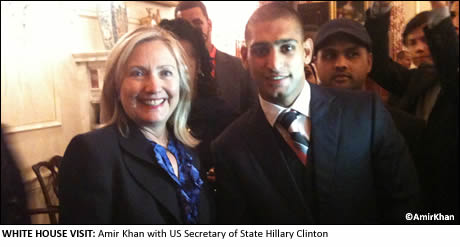 AMIR Khan swapped his Bolton home for the White House during his recent visit to the States!
The boxing star was personally invited by US Secretary of State Hillary Clinton to attend a special Eid Al-Fitr reception at the White House.
The 24-year-old was there to honour the contributions of Muslim American athletes and their ability to inspire young people around the world.
Though a British-Pakistani, Khan trains out of Los Angeles and has become an internationally recognised Muslim sports star since his silver medal victory in the Olympics in 2004.
“It’s a tremendous honour to be invited when you think of how many Muslims there are in the world and how many big sports stars there are. When we first got the email, I thought it was a bit of a joke, then when I realised it was genuine, I thought ‘Wow!’,” said Khan.
“It’s an opportunity to send out some good messages, for people to respect who we are. I have never been shy of speaking about my religion, though I know there are a lot of Muslim sports personalities who are,” he added.
“I speak the truth because I am what I am; I’ve got nothing to hide. It’s the way I’ve been brought up. I have never been afraid of saying I am a Muslim. I also speak out on controversial issues. People respect you more when you are honest. At the end of the day it’s a tremendous privilege to go to the White House and I thank the Secretary of State, Mrs Hillary Clinton, for the invite,” Khan added.