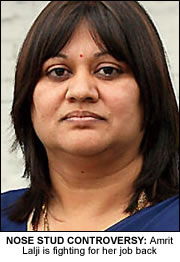 THE MAYOR of London and a leading British Hindu group have backed the case of an Asian woman sacked by a catering company for wearing a nose stud.
Amrit Lalji, 40, worked at Heathrow airport for caterers Eurest at the British Airways VIP Lounge before they dismissed her for wearing the nose stud.
Mrs Lalji, a mother of three, said she told her employers a number of times she wore the stud for religious reasons.
She even produced a letter from the Hindu community in Stanmore, north west London, where she lives, to support her case.
As a result she wore the nose stud for over a year before she was suspended and subsequently sacked after British Airways Lounge manager David Goodchild complained about the nose stud this summer.
As she fights to overturn her dismissal London Mayor Ken Livingstone and the Hindu Council UK have backed her case and condemned the sacking.
Mr Livingstone said Mrs Lalji’s sacking was the wrong signal to send out to people from the Hindu faith.
“It is an attack on her right to freely express her religion and an attack on her right as a woman to dress as she wishes”, he said.
“Hundreds of millions of people follow the Hindu religion and it is difficult to imagine a worse way to welcome visitors from the Indian sub-continent to London than sacking a woman for wearing a Hindu nose stud.
“The suggestion that wearing a tiny nose stud is a threat to public health and safety is frankly ridiculous. Will this company now be sacking all women with pierced ears?
“I will be writing to the companies concerned to ask them to reconsider their decision and reinstate Mrs Lalji.”
A spokesperson for the Hindu Council UK said the nose stud was a very important symbol for married Hindu women.
A spokesperson said: “the Hindu Council UK agrees that wearing a nose stud is an integral part of this particular woman’s faith. If the company concerned allow wedding bands and sleepers in the ears to be worn we do not see why Amrit Lalji should not be allowed to wear a small nose stud.”
Mrs Lalji, whose case has also been backed by the GMB Union, said she was “upset” at her treatment.
She said: “I am extremely upset by this and feel that I am being discriminated against. I had always made it clear that I wear it as part of my Hindu faith.
“I’m not expecting people to make huge exceptions for me and I could understand if I was wearing a massive stud but this is a tiny pin. It was so small it was almost impossible to see.
“I was completely happy to wear all the uniform. I’m just asking for a little bit of tolerance and common sense over me wearing a nose stud.”
A statement by Eurest said: “Mrs Lalji had been advised of company policy on a number of occasions which states that, with the exception of a plain wedding ring and sleeper earrings, jewellery must not be worn while on duty and flesh piercings are not permitted.
“Jewellery can harbour bacteria, create a hazard when working with machinery and find its way into the food people eat.
“A meeting was held with her and her appropriate union representation and she was placed on full pay while we tried to resolve the issue
“Mrs Lalji’s decision not to return to work without the nose stud contravenes company rules and regulations and she was dismissed.”
The case is not the first time religious markers have caused controversy at Heathrow airport.
Worker Nadia Eweida was sacked, and later reinstated by British Airways for wearing a Christian cross round her neck.