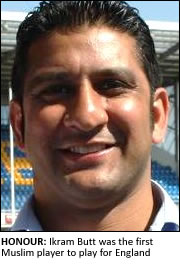 FOUNDER of the British Asian Rugby Association (BARA), Ikram Butt, is to be awarded an honorary degree by Leeds Metropolitan University as part of the Summer Graduation celebrations.
A professional rugby league player, Ikram played for several Yorkshire teams, including Leeds Rhinos and Huddersfield Giants, making history in 1995 when he became the first South Asian and Muslim player to represent England at either code.
After his retirement from rugby he set up BARA in Bradford in 2004, with the aim to provide positive role models and increase community integration. BARA was praised in 2007 by Gordon Brown during Prime Minister’s Question Time, and was officially endorsed by former Sports Minister, Gerry Sutcliffe.
Ikram now manages the Connecting Communities Project for Leeds Rugby Foundation, developing sport involvement across cultural and religious boundaries. In 2009 he released an autobiography entitled ‘Tries and Prejudice’ which outlines the social struggles Ikram faced during his time in sport, as well as the effect religion can have on training.
Ikram is an Ambassador for MOSIAC, an international charity, founded by HRH Prince Charles, which works towards a more integrated and thriving society where all individuals, regardless of background, are supported in realising their potential.  His dedicated work has resulted in awards from both the Asian Power 100 FutureLeaders and the British Muslim Honours Ceremony.
Summer Graduations are taking place at the University’s Headingley Campus from Monday 18 to Saturday 23 July, where over 5,000 students will graduate over six days, alongside nine honorary degree recipients.
Graduations from all four of the University’s faculties will take place – The Carnegie Faculty, the Faculty of Business & Law, the Faculty of Arts, Environment & Technology and the Faculty of Health & Social Science.

What do people really look for in a partner?

‘I don’t compete with anyone’, Salman Khan

Brangelina Comes to an End