Home Competitions Win a copy of ‘One Night in Turin’

THIS COMPETITION IS NOW CLOSED
Congratulations to our winners: Adil Hussain and Mohammed Ansar 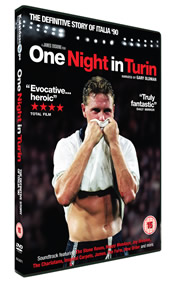 PRODUCED by an Oscar/Emmy/BAFTA-winning team, One Night in Turin tells the inside story of the World Cup of 1990 and is based on the best-selling book ‘All Played Out’ by Pete Davis.
The film will recreate the mood of 1990, English football’s greatest adventure on foreign soil in the build-up to this Summer’s “greatest show on Earth”.
To celebrate the 2010 World Cup in South Africa we have 2 copies of ‘One Night in Turin’ to giveaway.
To be in with a chance of winning just answer the following question:
Who missed the penalty that knocked England out of Italia 90’?
Was it: A) Paul Gascoigne, B) Gary Lineker, or C) Chris Waddle
E-mail your answer along with your name and address to competitions@theasiantoday.com
Closing Date: 30th June 2010
Winners will be chosen at random and notified by e-mail.