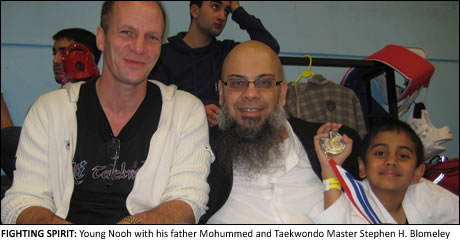 LITTLE Nooh Waqarul Haq is proving to be a sporting gem after landing his first Taekwondo title just six months after taking up the sport.
The eight-year-old from Balsall Heath, Birmingham, blew away competitors to take the Silver Medal in the Peewee category at the British Masters Open Taekwondo Championship held in Coventry last month.
Remarkably it was the first time Nooh, who is a pupil at St Edward’s Catholic Primary School, had participated in any Taekwondo or martial arts championship – and you would never have guessed watching him fight to a silver medal.
Dad Mohummed said the family were immensely proud of their little champ.
“The whole family, his mother and relatives are so proud of Nooh’s achievements. He is really a good boy and very hard worker. The British Masters Open Taekwondo Championship 2012 was his debut championship and he’s really done well at such a young age as well. He really worked hard for this.”
Somewhat of a sport fanatic, Nooh already had a number of trophies and medals in sports including Football, Kyokushin Karate, Gymnastic and Cricket, by the time his dad introduced him to Taekwondo.
Mohummed says: “I took him to the Second City Olympic Taekwondo club at Bishop Challoner Sports Centre to see what he thought. After his first class he really liked it and wanted to start straight away.”
After just a few short months at the club Nooh achieved his Yellow Belt and instructors David Grey and Ibrahim Ibrahim are eager to get him competing at more championships in the future.
The Second City Olympic Taekwondo club is part of the Ki Taekwondo Association based in Stockport which is run by Master Stephen H. Blomeley.
And Mr Blomeley was on hand to see Nooh win his first Taekwondo medal in what was a special moment for dad Mohummed.
“Nooh is our little jewel and gem and the future asset for the country & community,” says a delighted Mohummed. 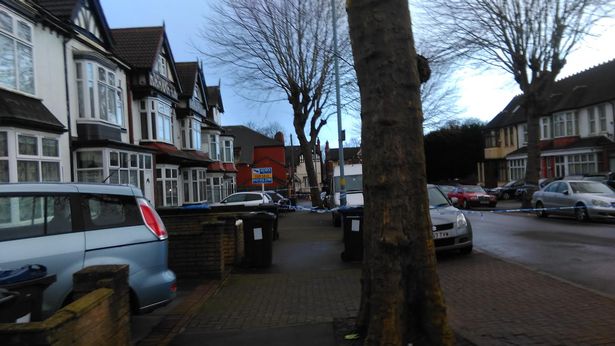 Man Found Beaten to Death at Bedsit in Small Heath

What Is Actually Hornet? The homosexual appreciation tools built to let you sting men