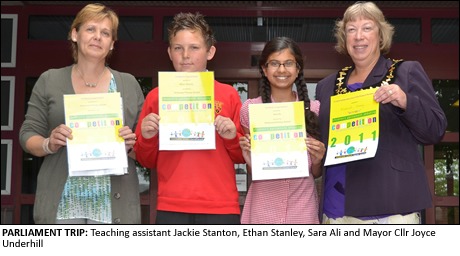 CHILDREN from Whitecrest Primary School in Great Barr are celebrating after winning a trip to Parliament in a debating competition.
Teams of two from 12 schools across Sandwell debated climate change in the Children’s Parliament event at Sandwell Council House, Oldbury.
And Whitecrest’s Sara Ali and Ethan Stanley, both aged 10, were judged the winners.
They were presented with certificates by Sandwell Mayor, Cllr Joyce Underhill.
They also received special permits for a class visit to the Palace of Westminster, arranged by West Bromwich West MP Adrian Bailey.
Youngster Sara Ali said: “We talked about greenhouse gases and the effect they’re having on the climate. It’s a very important subject.”
Ethan added: “I was nervous at first but it was very exciting.”
Cllr Mrs Underhill said: “The Children’s Parliament provides an opportunity for young people to air their views and ‘have a say’ on community and global issues.
“The event makes young people think about their concerns and responsibilities to the planet.
“It’s a great focus for their literacy work and introduces them to local democracy.”