Home Competitions Win a copy of It’s A Wonderful Afterlife on DVD!

THIS COMPETITION IS NOW CLOSED: Congratulations to our winners Adeeb Khalid, Mariyah Chaudhry and Salma Mahmood 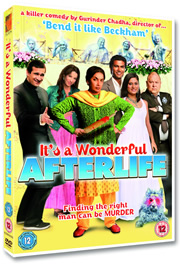 GURINDER Chadha fans can finally get their hands on her hit killer comedy It’s A
Wonderful Afterlife later this month when it’s released on DVD!
The film, which stars Bollywood A-lister Shabana Azmi, Sex and the City 2’s Goldy Notay and Heroes stud Sendhil Ramamurthy, is available to own on DVD on 16th August from Icon Home Entertainment and includes a number of extras perfect for a movie night in!
Extras include exclusive interviews with the cast and crew, deleted and alternate scenes, It’s a Wonderful Premiere featurette and theatrical trailer.
We’ve teamed up with Icon Home Entertainment to offer three lucky readers the chance to get their hands on a copy of the DVD.
To be in with a chance of winning, just answer this simple question:
Which of the following is a Gurinder Chadha film?
Is it:
A) It’s A Wonderful Life
B) It’s A Wonderful Afterlife
C) It’s Just So Wonderful
If you think you know, e-mail your answer with your name and address to
competitions@theasiantoday.com before 27th August 2010.
Winners will be chosen at random and notified by e-mail.
It’s a Wonderful Afterlife is released on DVD on 16 August courtesy of Icon Home Entertainment