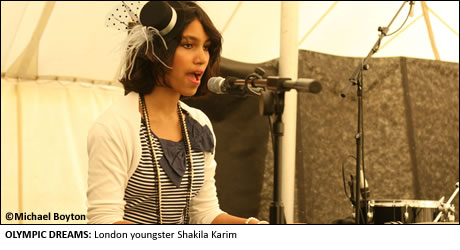 TEENAGER Shakila Karim may look like she’s wasting no time targeting showbiz glory – but for this 13-year-old performing at the London Olympics next year is holding more importance than a number one single.
Shakila, who was born in Whitechapel, east London, releases her debut single ’Just Let It Go’ on 4 July -and she’s hoping the song will help her achieve her Olympic dream.
The teenager, who is part of East London’s Bangladeshi community, is proud of being British and equally proud of her family heritage.
So far, there hasn’t been a singer of Bangladeshi origin who’s made a big impact in the charts – but Shakila is hoping to change that this year.
She said: “Along with my team, I’ve been working extremely hard to prepare for this moment and I hope we can give people something they will enjoy listening to. Like every newcomer to the music scene, I hope this single will be the first of many recordings I’ll make.
“And, as someone who has nearly all of their family and friends in East London, I’d love to have the opportunity to show what’s good about the people of this area to the world – and, maybe, get to sing on ‘home turf’ at the Olympic Games. It would be a dream come true,” she added.
Despite showing an aptitude for music as a toddler, Shakila had to spend time with speech therapists in school and also locally to help her speak. Yet she was able to sing nursery rhymes perfectly while she was seeing her speech therapists.
About that time, Shakila started playing her first musical instrument: the violin. She then learnt to play the recorder and her music teacher, Miss Barrett, thought highly of her musical talents – prompting Shakila’s father, Karim Ullah, to encourage and help her to develop her musical skills.
The family moved out of the East End when Shakila was 11 years old and she started her secondary education at Hockerill Anglo-European College, a state boarding school in Bishop’s Stortford. Shakila started taking singing lessons from the first term and, in her first year at the school, she passed her Rock School grade three exam.
During the 2010 summer holidays, Shakila focused her attention on singing and uploaded her first videos on YouTube. But tragedy was to strike her family.
That year, her father, Karim’s, business failed and, consequently, Shakila had to be taken out of boarding school and had to stop taking singing lessons. The business failure also meant the family became homeless and had to live in a hostel for some time.
While living in the hostel, Shakila’s father became ill. He had to have major surgery and was hospitalised for several weeks.
During this time, Shakila took her music even more seriously. She started performing at local venues, entered this year’s Stortford Music Festival and even auditioned for ‘Britain’s Got Talent’.
On being told that she might be able to use her musical career to represent the Bangladeshi community from the East End, she has become even more determined to give her all to make this happen.