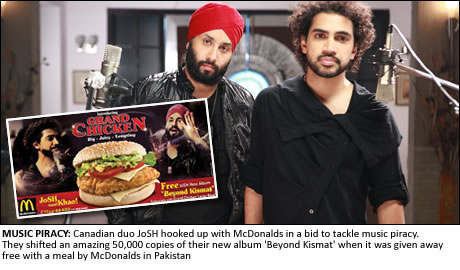 CANADIAN duo JoSH are winning their battle against music piracy – thanks to an innovative campaign with fast food giant McDonalds.
Pakistan Fans of Toronto based JoSH have been given free copies of their latest album ‘Beyond Kismat’ when they buy a Grand Chicken Large Meal.
And the deal is proving to be the real deal with over 50,000 copies handed out in just three weeks.
Jamil Mughal, country head of McDonalds Pakistan said: “We consider the ‘Beyond Kismat-Grand Chicken’ deal as one of our highly successful campaigns with an amazing response all over the country.
“It was beneficial for both the parties, McDonalds considers it their social responsibility to promote original music and kill piracy, and this was our first step towards it.”
JoSH duo Rupinder Magon – aka Rup, and Qurram Hussain – aka Q, were eager to do their bit to combat piracy.
Rup explains: “Whether it’s clothing, perfumes, or even chocolate, every industry has piracy. Along with one of the most well known brands on our planet, McDonalds, we have done our very best to fight the music pirates.  How can they possibly offer our album cheaper than FREE! 50,000 units distributed and counting.  Beyond Piracy, Beyond Status-Quo, Beyond Kismat.”
Q adds: “Our fans have continually supported us including the past few years while we were touring and we wanted this to be a gift to them from us. What better way to say thank you, than to give them out next album for free.”
The album is available to buy from iTunes now.