West is West star back in Bradford for DVD signing 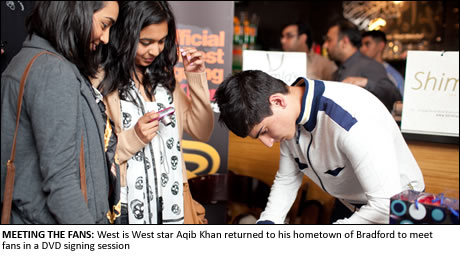 TEENAGE heart-throb Aqib Khan is riding on the success of his big screen debut, West is West, which released in cinemas nationwide earlier this year.
The talented young actor packed out Shimla’s restaurant in his hometown of Bradford for an official West is West DVD signing. Aqib shot to fame playing the role of Sajid, the youngest Khan, in the sequel to the hugely popular 1999 film East is East.
The DVD signing marked the first time since the film’s cinema release in February, that Aqib had a chance to reunite with old school friends and meet some of his die-hard fans.
He said: “This has been a complete rollercoaster for me – from the release of the film until today, I have been absolutely gob-smacked with the amount of support. I never thought that one audition would have led to this kind of success. Thanks to all my fans for supporting me and the film! ”
The hugely popular star sold out the premiere of West is West at Bradford, Cineworld in February, as hoards of screaming teenage girls flocked to the cinema to catch a glimpse of him.
Aqib, now 16, began shooting for the film when he was just 14-years-old and as well as celebrating a box office hit with West is West, he has landed himself a role in the new ITV series, The Jury, alongside acting legend Julie Walters.
West is West is out now on DVD & Blu-Ray.