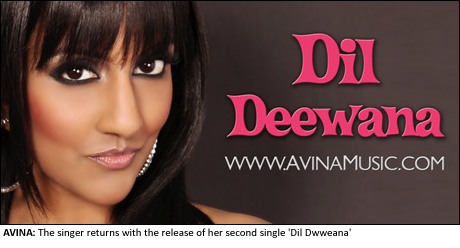 BRITISH Asian singer Avina Shah is gearing up for the release of her second single ‘Dil Deewana’.
The talented star hit the headlines last October after she used her debut single ‘Tere Bina’ to raise awareness on the common yet delicate issue of domestic violence. She donated the proceeds from the single to West London based charity the Southall Black Sisters.
But for her new single, Avina is hoping to secure a summer anthem.
Dil Deewana’ combines an eclectic mix of electro pop and Reggaeton beats with Avina’s sugar sweet Hindi lyrics. The single also features rapper Blaze Blackheart, along with Balwant Panesar and his breathtaking classical vocals, to add a new twist to the track which will be accompanied by an animated music video.
“Dil Deewana is a carefree dance track all about letting go, forgetting your troubles and letting your hair down on a night out,” Avina says.
“It’s very light-hearted, hence the title meaning ‘my heart is crazy’ and shows a totally new side of my personality! The music features a creative mixture of different styles as we wanted to add variation to the track. The video also shows the different moods with its energetic choreography and various image changes.”
As a professional singer, Avina has been regularly performing all across the UK and also internationally, including various locations such as the US, Middle East, Africa and Europe.
‘Dil Deewana’ will be released worldwide digitally on 3rd June 2011 and will be available to download on iTunes and other popular online stores.