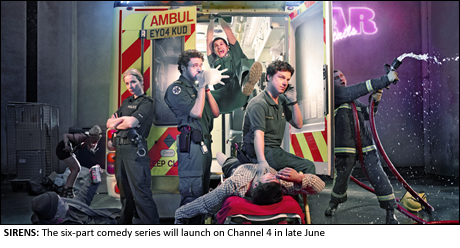 HERE’S a first look at Brit actor Kayvan Novak in the new Channel 4 comedy ‘Sirens’.
The six-part comedy drama series will launch on Channel 4 in late June and follows a team of world-weary paramedics on the streets of Leeds.
Novak, also known for his Fonejacker and Facejacker shows on the channel, is joined on the show by actors Rhys Thomas and Richard Madden.
Novak, who picked up the Best British Comedy Performance in a film for his role in Chris Morris’, Four Lions, plays Rachid – a man with a naughty past that’s always threatening to catch up with him.
A spokesperson for Channel 4 said: “Behind the non-stop boasting about his sexual prowess, Rachid’s biggest worry is the niggling self-doubt that the girls he sleeps with only ever view him as an exotic – Muslim – sideshow and never the main event.”
Watch this space for more information!